The defeat marks an end to a fine winning streak in the league for Danny Searle’s men, while Halifax extend their unbeaten run to six.

The first chance of the game fell to the hosts inside three minutes. A low-driven cross from the right found Billy Chadwick on the six-box but the forward’s wayward strike fell to Tahvon Campbell on the left. The attacker cut inside before seeing his effort deflect onto the crossbar and out for a corner.

Danny Searle’s side defended well, conceding numerous corners from a flurry of low crosses into the penalty area before forcing an early counter-attack.

Jermaine Anderson found Josh Rees in the middle and the midfielder made a darting run through the heart of the park before releasing Mo Bettamer, but the striker’s shot was tipped away by Sam Johnson in goal.

Halifax continued to press and rattled the crossbar for a second time as Chadwick’s swerving strike came close to giving the home side the lead.

Aldershot Town began to grow into the game by maintaining possession in the opposite half. Toby Edser saw his long-range effort was held before Lyons-Foster saw his fierce shot off the upright pulled back for offside.

Aldershot Town started the second half with intensity and almost broke the deadlock through Bettamer in the 53rd minute. Joel Nouble stood firm in midfield before finding Edser, and the midfielder picked out Bettamer in space on the left, but the striker’s low-driven shot was saved well by Johnson.

Just moments later, Rees saw his strike from distance tipped wide by Johnson as the visitors ramped up the pressure.

Halifax retaliated with a fine breakaway move from Chadwick down the right before the attacker’s drilled cross came agonisingly close to finding Campbell at the back-post.

Substitute Kian Spence sparked more energy for the hosts and the full-back almost made an instant impact with a diving header that flew across the face of goal and out for a throw-in.

Neither side found the net until the 80th minute when Chike Kandi’s brilliantly curled ball from the right met Harrison Panayiotou’s firm header at the back-post. The ball nestled into the top corner as the linesman’s flag went up to deny the visitors.

It was the hosts who found a crucial late goal as Spence and Jeff King linked up to release Allen on the right. The midfielder pushed his run to the edge of the penalty area before slotting past Ryan Hall to break the deadlock.

King came close to adding a second for Halifax after seeing his powerful effort pushed away by Hall with time edging away of Aldershot Town.

Despite an abundance of possession in the final minutes of the match, Searle’s squad were unable to find a clear opening and Halifax maintained a threatening counter-attack to seal the three points.

The defeat brings an end to Aldershot Town’s fine recent form in the league and the result pushes Searle’s men to 13th in the table approaching Saturday’s game against Boreham Wood. 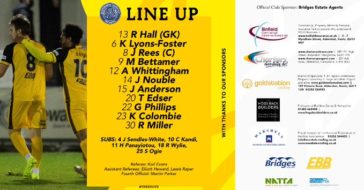