Aldershot Town picked up their first draw of the season in a 2-2 draw against Eastleigh away at the Silverlake Stadium on Saturday evening.

It was Eastleigh who took the advantage first through Joe Tomlinson’s penalty before Craig Tanner quickly replied with a wonderful free-kick.

Alfy Whittingham guided his header into the top left-hand corner but Eastleigh defender Alex Wynter scored a late header in injury-time to rescue a point for the hosts.

Looking to kick-on from Tuesday’s thumping 5-0 win over Dover Athletic, Danny Searle made one change as Alex Finney made way for Kodi Lyons-Foster.

The game was even in the opening ten minutes as Eastleigh had the first opportunity of the game when Sam Smart’s cross was met by the head of Cavaghn Miley and saved comfortably by Mitch Walker before Aldershot Town came close shortly after as Whittingham’s header went just over the bar after an impressive long-throw from Shadrach Ogie.

Aldershot had another opportunity to open the scoring as James Rowe floated a free-kick into the Eastleigh area and the ball fell to Josh Rees who just couldn’t get enough power on his effort as Joe McDonnell dealt with his first test of the game.

The momentum of the game was paused as Mo Bettamer went down following a strong aerial challenge from the Eastleigh defender. Following treatment, he was good to carry on.

Following the stoppage in play, Aldershot had a great chance to lead as Rowe’s dangerous corner found the head of Bettamer who came agonisingly close to continuing his great goalscoring form so far this season.

Aldershot were having a good spell with a few half-chances falling their way with Whittingham having the best of them as his shot was blocked by a pair of Eastleigh defenders. Harrison Panayiotou also went close but he couldn’t beat the offside trap when his effort hit the post.

Shortly before half-time, referee Thomas Parsons made his first big decision of the game giving a penalty to Eastleigh as the ball appeared to hit the arm of George Fowler. Tomlinson stepped up and converted his penalty in the top right-hand corner to score his first goal for Eastleigh.

The penalty didn’t phase the Shots as they equalised straight after. Panayiotou won a free-kick in a promising position and Tanner stepped up to curl a delightful free-kick into the top right-hand corner just before the interval to score arguably one of the goals of the season so far.

The second-half started with a yellow card for Lyons-Foster as his strong challenge on the halfway line earned Aldershot their second card of the game following Rowe’s late challenge on Abdulai Baggie in the first-half.

Shortly after, Aldershot had a chance to go in front as Bettamer turned his man and fired a low effort from an acute angle but McDonnell was there to flick the ball just wide of the far post after rolling across the line.

Aldershot’s early pressure in the second-half paid off when they finally got the lead they deserved. Tanner showed his danger once again as he whipped in a dangerous cross to find Whittingham who was left unmarked to head home his first of the season.

Aldershot came close to a third just moments after when Panayiotou raced clear on goal but he could only fire straight at the keeper. Eastleigh were struggling early in the second half to deal with Aldershot’s frontline as they were almost punished by Tanner again who curled his effort off the inside of the post.

Substitute Dan Smith headed just over the bar for Eastleigh late on but Aldershot continued to put the pressure on the hosts as substitute Ross McCormack fired over the bar from a direct free-kick in a dangerous position.

Eastleigh pushed for an equaliser and their late pressure paid off when Wynter scored a header in injury-time to force a draw for the Shots. 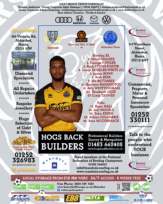