Aldershot Town picked up their first three points of the season with a resounding 5-0 victory against Dover Athletic away at Crabble Stadium on Tuesday evening.

On a wet evening, it was Aldershot Town who took the advantage through Harrison Panayiotou’s well-time effort.

Braces for both Josh Rees and Mo Bettamer over the course of the first and second-half sealed the resounding victory for The Shots, with forward Ross McCormack coming on for his late National League debut.

Looking to bounce back from last Tuesday’s home defeat to Sutton United, Danny Searle went with a number of changes that impressed in last Saturday’s friendly against Brentford ‘B’, with James Rowe, Harrison Panayiotou and Alfy Whittingham coming in from the start.

Forward Ross McCormack was also introduced to the match-day squad for the first-time since signing for the club, by being named on the substitutes’ bench.

Aldershot Town looked dangerous in the first 20 minutes, as they looked to take the early advantage in the game with Craig Tanner having a few of the opportunities.

In just the 2nd minute, Bettamer picked out Tanner with a lovely ball over the top, but the latter’s audacious volley was mishit and no trouble for Josh Bexon in the Dover goal.

However, Aldershot Town continued to pile the pressure on and Tanner found a yard of space just three minutes later, but his low drive was well-held by Bexon once again.

The Shots continued to press and after a number of half-chances, they found the opening goal in the 32nd minute through the returning Panayiotou.

Following a Rowe corner, the ball comes back to the midfielder whose cross caused confusion before falling to the onrushing Panayiotou, who did well to keep his composure and finish from close range.

On a quick counter-attack, Bettamer drove forward from the left-hand side before cutting inside and bending a brilliant finish past Bexon for a well-deserved second.

The Shots came close to a third just before the half-time whistle blew, with Craig Tanner picking up the ball down the right, before laying the ball back for Whittingham but the wet conditions saw the midfielder unable to get the ball out of his feet and Dover able to clear their lines.

However, there was just enough time for Aldershot Town to grab a third in the 45th minute with Josh Rees coming into the box late and tapping in after an intial scramble from the home side, leaving Aldershot Town in control going into the half-time break.

The Shots came into the second-half looking to continue their dominance in the second-half and were a constant threat on the Dover Athletic goal and would find that fourth goal in the 58th minute, replicating the scoreline against The Whites last season at home.

There was still time late on for Bettamer to pick up his second of the evening in similar fashion to his goal against Brentford ‘B’ last Saturday, cutting in from the left-hand side and firing goalwards, with the luck of the deflection seeing the ball find the back of the net in the 85th minute.

Rees found himself almost able to complete his hat-trick late on in the 90th minute with Tanner picking out the midfielder, whose cool lob over the keeper went just wide of the post as referee Alan Dale called time on a fantastic results for the Shots, as we go to Eastleigh away on Saturday full of confidence. 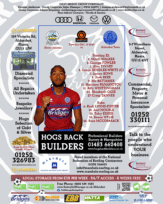