10-man Aldershot Town held out for a point against Chesterfield in a goalless draw at the Technique Stadium on Tuesday evening.

The first half was relatively quiet for clear-cut chances, but Brad James was called into action on a number of occasions in the second period, which he was equal to every time.

Alfy Whittingham was dismissed with eight minutes to play after a late challenge, but despite the inevitable late flurry of pressure, Aldershot were able to hang on for the point.

Danny Searle made just the one change from the defeat at Wrexham 10 days ago with Chike Kandi coming into the side in place of Joseph Hungbo.

Mo Bettamer had the first shot of the game five minutes in, an ambitious but close long-range effort which went just wide of the left post.

It wasn’t long before the hosts had their first opportunity which was a big one. Liam Mandeville got in on the right-hand-side and forced a save from James from a tight angle before retrieving the ball and cutting it back to Akwasi Asante. The number nine could only direct his attempt just wide of the left post.

Asante was involved again in the tenth minute, holding the ball up well before laying it back to Tom Denton who skied his effort way over the bar.

The forward had another opportunity in the 25th minute. After manoeuvring a bouncing ball into space he blazed the shot well over the bar from a good position.

Just a minute later, James had to make a good save to deny Denton when the ball dropped to the striker inside the box before Kodi Lyons-Foster made a vital interception to poke the loose ball out for a corner.

The Aldershot goalkeeper made another fine save from a deflected Curtis Weston long-range strike after half-an-hour. James managed to stretch well to his right-hand-side to push it around the post.

Aldershot started the second half well, winning a free kick in the first couple of minutes. The visitors attempted a clever set-piece which resulted in a shot from Josh Rees being deflected wide for a corner. The corner itself was also very dangerous until the referee spotted an offensive foul.

The home team probably should have taken the lead just shy of the hour mark. James was pressed into an error by Mandeville who, with the goal beckoning, managed to put the ball wide of the left post.

Five minutes later it was the Shots turn to come close. Shadrach Ogie played a threatening ball into the box which took a deflection before going just wide of the far post.

James probably his best save of the night following his own error after miss-kicking his clearance. Substitute Jak McCourt controlled the clearance and went for the open goal from 40 yards out, but the Aldershot goalkeeper managed to get back just in time to flick the ball over his own bar.

The following corner probably should have also resulted in a Chesterfield goal after a front post flick on narrowly avoided another blue Chesterfield shirt at the back post.

With 13 minutes to play Aldershot also should have taken the lead at the other end when a great cross from George Fowler could only be headed straight at the goalkeeper by Bettamer.

The hosts thought they had finally broken the deadlock a minute later when Boden directed the ball past James from close range, but fortunately the linesman’s flag went up as the substitute was deemed to be in an offside position.

The task suddenly became much more difficult with eight minutes to play as the Shots went down to ten men. Whittingham’s heavy touch led to a late challenge on David Buchanan before the referee showed the midfielder the red card.

In the 85th minute, a little bit of pinball ended up in James’ hands following a dangerous cross.

The Aldershot number 35 was called into action again in the final few minutes. He made a brilliant diving save to prevent Weston’s drive towards to top right corner. 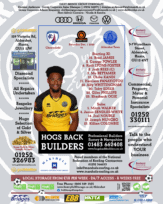