Aldershot Town lose in front of the BT cameras against Bromley FC thanks to goals from Jack Bridge and Michael Cheek at Hayes Lane in the National League.

Bridge opened the scoring for Bromley out of nowhere with a curling effort before Bingham’s deflected effort off of Cheek doubled their lead.

Looking to improve on Tuesday’s defeat against Weymouth FC, Danny Searle made four changes to the starting lineup with Kodi Lyons-Foster, Alfy Whittingham, Harrison Panayiotou and Brad James coming in for Jamie Sendles-White, Killian Colombie and Mitch Walker. George Fowler remained out due to injury.

The first opportunity fell to Aldershot Town when Joel Nouble received a pass from midfield and drove done the right-hand side and picked out Harrison Panayiotou who headed into the arms of Mark Cousins. Another chance came shortly after when Jermaine Anderson’s free-kick found Nouble whose audacious back-heel was well-held by Cousins.

Early pressure from Aldershot Town was not taken advantage of as Bromley took the lead. Jack Bridge picked up the ball on the left-hand side and cut inside onto his right foot before finding the far corner.

Aldershot Town continued to pressurise the Bromley defence with Anderson having a chance to equalise. A great pass from Toby Edser allowed Anderson to find space in the penalty area but his swivelled effort on goal went over the bar.

Just after the interval, Aldershot Town picked up where they left off with Nouble attempting to pick out Mo Bettamer at the far post but the ball was just beyond the reach of Bettamer.

The momentum was with Aldershot Town and substitute Ricky Miller almost provided a chance for Panayiotou with a cross. Shadrach Ogie crossed the ball back in and found Nouble who couldn’t pick out an Aldershot Town player and the ball went out for a goal kick.

Miller had a big influence on the game, and he soon had a chance of his own when his effort from distance produced a good save from Cousins that saw the ball fall to Nouble, but his deflected shot went just wide of the far post.

Aldershot Town’s pressure came undone when Bromley doubled their lead just over 10 minutes from time. Clever play from Bromley outside of the area allowed Billy Bingham to hit a goalward effort that deflected off of Michael Cheek past Brad James.

Aldershot Town piled on some late pressure but Bromley held onto their two-goal lead to make it two losses in one week for the visitors. 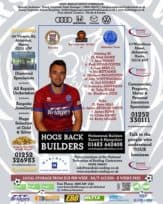