Despite coming back from two goals down through a Shadrach Ogie wonder-goal and a Jamal Fyfield own goal, goals from Kabongo Tshimanga, Gus Mafuta and Sorba Thomas were enough to give Boreham Wood the win at Meadow Park.

It was Boreham Wood who got the advantage first through Tshimanga who converted from the penalty spot before Mafuta doubled their lead shortly after with a rebound after James saved the initial effort from Tshimanga.

The game changed for the Shots when Ogie hit a wonder strike from distance to get Aldershot back into the game before an own goal by Fyfield completed the comeback for the Shots.

In the last few minutes of the game, Thomas rounded Brad James to regain the lead for the Wood and seal the win for the hosts.

Looking to improve from Tuesday’s loss against FC Halifax Town, Danny Searle made one change to the starting line-up. Killian Colombie started ahead of Alfy Whittingham who had one more game to miss out due to suspension.

The first opportunity fell to Aldershot when James Rowe took a short free-kick to lay off Josh Rees who found Kodi Lyons-Foster at the back-post but his header went narrowly wide of the far post.

Shortly after, the hosts had a chance to open the scoring when a clearance from the Aldershot defence fell to Tshimanga who hit a deflected effort towards goal but James did brilliantly to save at his near post.

The resulting corner came in and Mo Bettamer tried to win the ball but he brought down the Boreham Wood player and the referee pointed to the spot. Tshimanga converted from the spot sending James the wrong way to give the Wood an early lead.

Boreham Wood were gaining some confidence and they doubled their lead shortly after through Mafuta. Tshimanga’s effort was saved in a one-on-one with James but the ball fell to Mafuta for the rebound, scoring from outside of the penalty area,

Aldershot had a chance to reduce the deficit and they took it brilliantly through Ogie. The ball was laid-off to the on-loan Leyton Orient man and he hit the ball first-time from distance into the right-hand corner. The Shots were right back in it after one of the goals of the season from the full-back.

Aldershot were starting to gain some momentum their way and they had a chance to equalise when Chike Kandi’s cross into the box came close to providing an assist for Toby Edser or Bettamer as they both tried to head the ball goalwards but the ball went over the bar.

Shortly after the interval, Aldershot started where they left off in the first-half and momentum started to shift their way. Aldershot got their deserved equaliser after excellent work by Harrison Panayiotou on the left to get his cross deflected off of Fyfield past Nathan Ashmore to complete their comeback from two goals down.

After early dominance from the Shots in the second-half, Tshimanga had a chance for the Wood when he beat his man and curled his effort just over the left-hand corner before Matt Rhead headed narrowly over from a Thomas corner.

Aldershot were getting close to gaining the lead when substitute Mike Fondop had an instant impact finding Edser with the header who finds Rees who looks to find Kandi but Femi Ilesanmi defended well to clear the danger.

Fondop was again involved when Kandi flicked the ball on for the substitute who found himself one-on-one with Ashmore but Ashmore did well to deny Fondop the ability to round him and clear away the danger.

In the final minutes of the game, Boreham Wood started to pile pressure onto the Aldershot defence and they regained their lead through Thomas who rounded James after controlling a long ball and calmly slotted into an empty net despite the best efforts of Giles Phillips to block the ball.

Aldershot piled pressure onto the Wood defence in injury-time but it wasn’t enough to complete another comeback and Boreham Wood held out for the win. 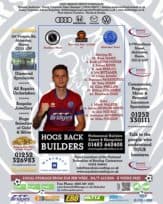