Goals from JJ Hooper, Ephron Mason-Clark and Tomi Adeloye condemned Aldershot Town to a first away defeat in four games as Barnet secure their first win in two months at the Hive Stadium in the National League.

Hooper opened the scoring for Barnet with a looping header before Harrison Panayiotou equalised with a close-range header.

Mason-Clark converted a penalty 20 minutes from time before Barnet sealed the win with an Adeloye solo effort.

Looking to build from our win against Weymouth FC, Danny Searle named an unchanged lineup for our away game against Barnet FC. Mo Bettamer comes onto the bench for our latest acquisition Kaylen Hinds.

The first chance of the game fell to Aldershot Town when a long ball from defence was laid down by Joel Nouble before Panayiotou’s audacious outside-of-the-foot effort went wide of the far post.

Halfway through the first-half, Mason-Clark came close to scoring the opener for Barnet when his volley was superbly saved by Mitch Walker before Hooper fired his rebound into the side-netting. Moments later, Barnet got the opener when Lee Vaughan’s cross picked out the head of Hooper whose looping header went over the head of Walker and into the back of the net.

Just six minutes later, Aldershot Town grabbed the equaliser. Toby Edser’s corner came in and it looked like Aymen Azaze had parried into his own net but the replays show that Panayiotou got the final touch to head home from a few yards out.

Shortly after the interval, Edser was close to grabbing another assist when he picked out an unmarked Kodi Lyons-Foster whose half-volley deflected over for a corner. The corner was played short by Edser but Barnet read the situation and cleared the ball away from danger.

Aldershot Town came agonisingly close to taking the lead when Edser’s corner met the head of Barnet’s Harry Taylor who headed against his own defender and the ball went just past the post with blushes spared.

Aldershot Town’s spell of chances were undone 20 minutes from time when George Fowler brought down Mason-Clark in the penalty area. Mason-Clark got back up and cooly slotted away his penalty to regain the lead for Barnet.

Substitute Ricky Miller made an impact shortly after coming on when he cut inside from the right-hand side and tried to pick out Edser but Barnet defended well as a succession of through balls were blocked and then cleared.

Aldershot Town had another opportunity when Bettamer brought down a long ball well before crossing to Fowler who couldn’t connect with the volley the way he wanted to and the ball went wide for a goal kick.

Aldershot Town were getting closer to finding the equaliser and they nearly did through Josh Rees who almost continued his fine goalscoring form with a volley but Azaze held well under pressure from our forwards.

In injury time, Adeloye latched onto a long ball and went on a solo run beating a few of our defenders before calmly slotting beyond Walker to put the game beyond doubt and secure their first win in two months. 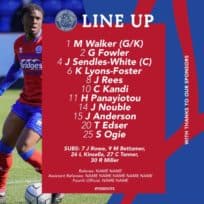