Aldershot Town started their 2021-22 pre-season campaign with a controlled 2-1 win against Combined Counties Premier Division South side Badshot Lea at the Operatix Stadium.

Looking ahead to the new 2021-22 Vanarama National League, Danny Searle named a mixed starting line-up with a number of recently-graduated academy youngsters given the chance to impress alongside several trialists.

An even first fifteen minutes saw both sides carve out a number of half-chances, but nothing to clear-cut to start off the game.

However, this all changed when Badshot Lea were awarded a penalty following a deliberate handball from Trialist C, which was in turn, converted by the Badshot Lea forward and found the left-hand corner.

Aldershot Town looked to respond to this by piling the pressure on and would get their just-rewards and levelled the score-line early on in the second-half, in the 51st minute with a well-taken penalty.

A well-worked goal from Trialist G gave Aldershot Town the winner, after his close-range tap-in was placed into the bottom corner following the slick move from right to left.

Aldershot Town started the match on the front foot, with chances from Walker and Trialist F testing Badshot Lea’s keeper early on.

Long distance shots followed, however they all whistled over the crossbar from both sides.

After a dominant first fifteen minutes from Aldershot Town, the game was turned on it’s head as Badshot Lea were awarded a penalty after Trialist C attempted a clearance that hit his hand.

The Shots goalkeeper, Hall, dived the right way but the penalty was converted on the left-hand side to put Badshot Lea ahead in the 18th minute.

On the brink of half time, Trialist F was close to opening the score line for Aldershot Town after he broke into the box, however, his effort was well-stopped by the Badshot Lea goalkeeper.

Aldershot Town boss, Danny Searle, changed the team around at half time, ensuring all youth players and other Trialists had a chance to impress.

The Shots started the second-half quickly in the perfect fashion as Trialist I calmly converted a penalty to level the scores, following an early spell of pressure in the second-half.

High-pressing from Aldershot Town saw the Shots create a number of opportunities to find themselves in front for the first time in the game.

The high-press was rewarded soon after, with Trialist G calmly finishing the ball into the bottom right hand corner in the 64th minute to put Aldershot Town ahead, after doing well to bounce back from an early setback.

Aldershot Town thought they had scored a third in the 82nd minute after a well-worked move saw half-time switch Tommy Willard slot the ball into the back of the net, however, it was unfortunately called back for offside as The Shots saw out the game to start the pre-season campaign off with a victory.

The Shots now look to ahead to their next pre-season fixture, which is against Heybridge Swifts on Tuesday 13th July at 7:45pm. 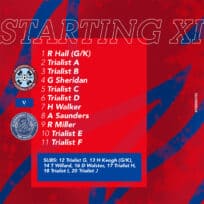 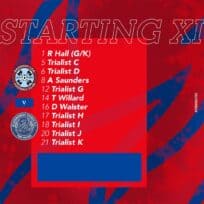