Toby Edser and Chike Kandi scored their first goals for Aldershot Town as they overcame Altrincham 1-2 at Moss Lane on Saturday afternoon to make it back-to-back National League victories.

Edser started for the first time since October 6th and rewarded the decision with a great finish inside the first 15 minutes.

Kandi came off the bench to double the advantage just over ten minutes from time with a well-taken goal, relieving a bit of second-half Altrincham pressure.

The hosts did get one back through Tom Peers with a couple of minutes to play, but the Shots held on for a victory which moved them up to 11th in the National League.

Danny Searle was forced into a number of changes after last week’s victory over Notts County. Mo Bettamer was away on international duty with Libya while Craig Tanner and Jamie Sendles-White had picked up injuries during the week. They were all replaced by debutants Joseph Hungbo, Mike Fondop and Giles Phillips. Chike Kandi also dropped to the bench and Edser made his first start in over a month.

It was a good start by Aldershot, having lots of possession in the attacking areas. Debutants Hungo and Fondop started well, linking up well with striker Harrison Panayiotou. Hungbo cut in on his left foot in the 6th minute just inside the area after being played through by Panayiotou, but the winger could only find the side-netting from an acute angle.

Panayiotou could’ve and maybe should’ve scored in the 11th minute. Shadrach Ogie linked up well with Edser on the left before he found the striker in the box, who controlled well before he poked wide of the right post with his left foot.

However, two minutes later, Aldershot took a deserved lead through Edser’s first goal for the club. The midfielder again linked up with Ogie on the left, this time getting the one-two back in the middle about 20 yards out before shifting it cleverly onto his weaker right foot and firing into the near post, wrong-footing goalkeeper Tony Thompson in the process.

Tom Peers had an excellent chance for the hosts when a misjudged ball found its way in behind the Aldershot defence, but Ogie got back very well and quickly to block the attempt before it could trouble Brad James.

In the 37th minute, Phillips almost got himself a debut goal. He got his head on a corner with a good connection but could only direct it just wide. The centre-back had another headed attempt four minutes later from an Edser free-kick, but it was both high and wide on that occasion.

In stoppage time Hungbo again showed his ability on the ball by wriggling his way into some space about 25-yards out, but his shot didn’t have enough power on it to trouble Thompson as he gathered comfortably down to his left-hand-side.

Andy Dales started the second half well for Altrincham, forcing James into a very comfortable save from distance.

Fondop had a good chance in the 52nd minute for the Shots when the ball was laid back to him by Panayiotou on the edge of the area, but the forward blazed over the bar.

Altrincham squandered a great opportunity in the 56th minute when the ball fell to Peers inside the box, but it was well defended in the end by the visitors. Aldershot broke up the other end very quickly from this, outnumbering the hosts in their defence until Hunbgo’s touch invited the defensive challenge after a poor touch having been played into a great position by Edser.

The hosts were almost level in the 64th minute. Dales ran at George Fowler before cutting inside on his right foot and curling an impressive effort over James. Unfortunately for his, it hit the bar and was cleared by the Aldershot defence.

Matty Kosylo also went close a minute or so later when he found himself some space in the box to fire at the near post with his left foot on the left-hand-side. James was equal to it this time, getting down well to his right-hand-side to push it out for a corner.

It wasn’t until 11 minutes were remaining in the match that the next goal of the game was scored. It was scored by Aldershot Town again, with Kandi also grabbing his first goal for the club. Fowler drove forward on the right before finding a ball into the middle which was left by Fondop. It fell to Whittingham who had supported well and held it up before laying it back to Kandi. The forward opened up his body and side-footed it into the far corner out of the reach of the slightly un-sighted Thompson.

Four minutes later Altrincham had a great chance to get back in the game through Kosylo, ut again an Aldershot defender recovered well to clock, this time in the form of Kodi Lyons-Foster, who was immediately thanked by James and the rest of his teammates.

Peers did manage to get a goal back in the 89th minute with an effort perhaps disappointingly not dealt with properly by James as he wasn’t able to prevent it going in the back of the net. 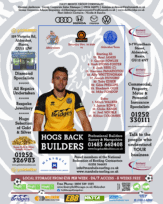