A stunning brace and assist from Nouble helped Aldershot Town record a comfortable 3-0 win over promotion hopefuls Wrexham AFC at the EBB Stadium.

Academy graduate Ben Shroll was named Man of the Match after a solid defensive display on his first-team debut. The youngster was named among five changes to Danny Searle’s line-up following Tuesday’s midweek defeat to Solihull Moors; with James Rowe, Chike Kandi, Alfy Whittingham, and Killian Colombie also named in the starting eleven.

The visitors started the first half on the front foot, and they almost took an early lead when Kwame Thomas was found free in the penalty area, but the attacker’s header was held well by Mitch Walker.

Danny Searle’s men responded by stringing together a tidy piece of build-up play which allowed Kandi slip through Whittingham, but Christian Dibble did well to parry the midfielder’s effort.

Wrexham continued to apply pressure in midfield in their search for an opener, with Tyler French and Reece Hall-Johnson testing Walker midway into the half.

But it was the hosts who took advantage in the 26th minute. Whittingham’s lofted ball into the penalty area was fumbled by Dibble before falling to the grateful feet of Nouble, and the winger made no mistake in tapping in from close-range.

The away side fought back almost immediately as Jordan Davies’ first-time strike on the edge of the box flashed past Walker’s near post but the Shots refused to succumb to the pressure and instead pushed for a second before the break as Ricky Miller wriggled his way through the Wrexham defence before firing his shot at Dibble.

The second half began in spectacular fashion for the hosts as Nouble found his second moments after the restart. The winger cut inside from the left before seeing his strike from distance deflect past a helpless Dibble to make it 2-0.

Luke Young retaliated for Wrexham, but his long-range free-kick failed to trouble Walker. Miller attempted to kill the game after maneuvering through the Wrexham midfield before forcing a fine, fingertip save from Dibble.

However, it was only a matter of time before the hosts found their third. Nouble produced more fantastic trickery down the right before releasing Jermaine Anderson for a simple tap-in with just over 20 minutes remaining.

A depleted Wrexham saw their closest chance of the half come in the 89th minute, when substitute Elliot Durrell rattled the crossbar from outside the box, with Walker punching away the follow-up. 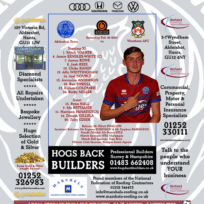