A belated Christmas present on Boxing Day as a Harrison Panayiotou finish and Jermaine Anderson brace give Aldershot Town the bragging rights against fierce rivals Woking in the National League at the EBB Stadium.

It was Aldershot Town who got the advantage first through Harrison Panayiotou’s finish after a clever free-kick before Jermaine Anderson scored two goals in quick succession, grabbing his first two goals for the club.

Looking to build from Saturday’s win against Welwyn Garden City, Danny Searle made five changes to the starting line-up.

The first opportunity of the game fell to Woking from a direct free-kick. The effort went over the bar and didn’t trouble James in goal before Aldershot had a half-chance when Chike Kandi laid the ball off to Bettamer who fired over the bar.

Out of nothing, Aldershot Town took the lead through Panayiotou. A clever free-kick saw Josh Rees head the ball back into the area to catch the Woking defence completely off-guard and Panayiotou beat the offside trap to slot past Craig Ross.

Moments later, the Shots doubled their lead with Anderson grabbing his first goal for Aldershot Town in his first league start for the club. Toby Edser had a big influence in the final third laying the ball to Bettamer who squared the ball to Anderson to smash home.

Anderson was having the game of his life and he grabbed a brace shortly after to make it three goals to nil in the opening 40 minutes. It was Edser again who did brilliantly to drive forward from midfield and hit his shot which fell to Anderson to tap home.

Woking still struggled to create much after the interval and they made a double change before the hour mark with Matt Jarvis and Dave Tarpey coming on for Slavi Spasov and Ben Dempsey.

Anderson kept on tormenting the Woking defence and he almost got an assist. Anderson’s cross found Rees in the middle of the park but his headed effort went wide of the post before Jamie Sendles-White denied a late opportunity for Woking with some good defending.

Panayiotou came close to grabbing a second when he raced clear on goal and produced a good save from Ross but the linesman flagged for offside before substitute Matt Jarvis curled his effort straight at James.

Woking applied some late pressure but the deficit was too much to retain and Aldershot Town earn back their bragging rights and all three valuable points. 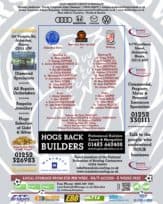