A brace from Mo Bettamer and a composed Toby Edser finish cancelled out a goal apiece from Solihull for Kyle Hudlin and James Ball to see Aldershot Town progress to the fifth round of the Buildbase FA Trophy for the first time in seven years.

A Mo Bettamer penalty opened the scoring in the 30th minute before midfielder Toby Edser doubled the score with a well-worked goal just seven minutes later as The Shots took this lead going into the second-half.

Looking to build on from their derby double against Woking, Danny Searle made three changes to the starting line-up from just over two weeks ago.

Alex Finney, Jermaine Anderson and Chike Kandi started in place of Giles Phillips, Alfy Whittingham and Harrison Panayiotou with all three looking to impress on their return to the side.

The first opportunity fell to Solihull Moors when Jordan Cranston’s free-kick bounced back off the near post after forward Kyle Hudlin earned a free-kick in the first minute of the game as Aldershot Town looked to battle the rainy conditions.

Solihull looked to add the pressure early on with a number of half-chances within the first 10 minutes of the game, but resolute defending within that period saw Aldershot Town looked to use their pace threat going forwards and create their first chance of the game.

This opportunity came just past the 13th minute as midfielder Anderson found space just outside the area before first a powerful drive that Solihull’s keeper Ryan Boot claimed well.

Aldershot Town then started to find their rhythm after winning the first corner of the game following a deflected effort from Kandi, which was in turn well-defended by Solihull Moors.

The Shots again looked to carve out a clear-cut opportunity after full-back George Fowler showed brilliant persistence to win the ball high up the right-hand side, before drilling in a dangerous low cross into the six-yard box that almost found the onrushing Aldershot Town players for an easy tap-in before being cleared away by the Solihull Moors defence.

The game started to even out for the next 15 minutes with both sides looking for their next opportunity to open the scoring as Fowler again crossed and found Mo Bettamer who did well to direct a header goal-wards back across the Solihull goal, but from a considerable distance from the goal, Boot gathered well.

However, after a bit of lashing out from Solihull’s Nathan Cameron, (who was given a yellow card for an altercation with midfielder Toby Edser), Aldershot Town’s number 20 got up and whipped in a dangerous free-kick that earned The Shots a penalty after birthday boy Joel Nouble was brought down by defender Alex Gudger in the 29th minute.

Mo Bettamer stepped up just a minute later and smashed the penalty home past Boot in the Solihull goal as Aldershot Town opened the scoring and looked to continue their good spell of pressure that earned them their first goal of the game.

Their good spell of pressure would pay off just seven minutes later as The Shots got their second goal of the game through midfielder Toby Edser.

Kodi Lyons-Foster intercepted brilliantly on the halfway line which allowed midfielder Josh Rees to drive forwards and find his midfield partner Edser, who took the ball in his stride into the penalty area and calmly slot it into the bottom corner for a deserved second for Aldershot Town.

A brilliant move between Nouble and Kandi almost saw The Shots find a third just before half-time with an inch-perfect pass from Nouble allowed Kandi to break into the penalty area before laying the ball across towards Bettamer, but last-ditch defending from the Solihull defence cleared the danger and stopped Bettamer scoring a close-range second goal.

There was still time for Solihull to create a final first-half opportunity to half the deficit as Cameron Coxe whipped the ball across from the right-hand side but from close-range and at a tight-angle, James Ball could only fire the ball wide, with Aldershot Town taking a two-goal lead going into the second-half.

Aldershot Town continued to look for more goals in the second-half and almost found themselves three goals to the good after a mistake in the Solihull Moors defence saw Bettamer react quickest to a loose ball in the penalty area, but as he looked for the far right corner, his effort was blocked by the last Solihull Moors defender and cleared away.

However, it was Solihull Moors who would find the next goal of the game after Joe Sbarra drove forward and passed across to Cameron Coxe, whose cross deflected into the path of Hudlin who in turn, headed home from just a few yards out in the 53rd minute.

Aldershot Town’s Mitch Walker was then forced into a brilliant save to deny Ball after he broke through down the right-hand side before Shadrach Ogie cleared the ball away.

Despite responding well to the Solihull goal, the Moors would find themselves level in controversial circumstances as a long ball from Boot was taken down by Sbarra who then laid the ball across to Ball for an easy tap-in inside the penalty area.

Although claims for offside came from the Aldershot Town players, the referee deemed the goal to be legal and the goal stood as Solihull Moors would find their equaliser in the 63rd minute.

The ball did find the back of the net for the third time for Aldershot Town in the 73rd minute as Bettamer cut the ball back for Anderson for a simple tap-in but the referee called it back for a foul on Edser just outside the penalty area.

What a great decision that turned out to be for The Shots as Bettamer would then step up to take the free-kick in the 74th minute and smash the ball past Boot as Aldershot Town got themselves back in front with just over 15 minutes to go.

The Shots continued to look for that goal that would surely see them through to the fifth round as in the 81st minute, Edser did well to find a cross that picked out Josh Rees just outside the penalty area, but his volley bounced into the ground and just wide of the Solihull Moors goal.

Solihull Moors continued to push for an equaliser however, and as the rainy conditions returned in the later stages of the game, recent substitute Mitch Hancox fired just inside the penalty area, before seeing his effort smash off the crossbar and Aldershot Town were able to clear their lines.

In a final piece of drama for the game, Aldershot Town could’ve found their fourth goal through a recent substitute of their own in Ricky Miller.

Miller did brilliantly to collect the ball down the right and took the ball around Boot in the Solihull goal but a Solihull Moors defender was there to clear away his goal-bound effort before the referee blew full-time on what was a frantic and exciting Buildbase FA Trophy Fourth Round tie, with Aldershot Town waiting for the result of Boston United v Chesterfield on Wednesday to see who they will face in the fifth round. 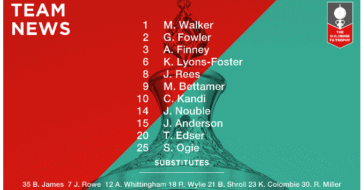