Despite pulling a goal back through Mo Bettamer’s penalty, goals from Luke Armstrong, Rhys Oates and Nicky Featherstone condemn Aldershot Town to defeat at the EBB Stadium in the National League.

Armstrong opened the scoring with a strike at the near post before Oates doubled the lead for the visitors with a header.

Bettamer pulled a goal back for Aldershot Town with an excellent penalty before Featherstone converted from the spot in injury-time.

Looking to build from our win against Yeovil Town, Danny Searle named one change to the starting eleven with Ricky Miller returning to start ahead of injured vice-captain Josh Rees. Reece Wylie was named on the bench whilst Alfy Whittingham returns from injury to make the squad on the bench.

Hartlepool had the first opportunity of the game when Featherstone’s corner found the head of Ryan Johnson but his header at the back post went over the bar.

It was Aldershot Town’s turn to come close to opening the scoring when a good move saw Craig Tanner look for Miller with an outside-of-the-foot pass over the top but former Aldershot Town loanee Brad James just got there to gather.

The momentum swung in the Shots’ favour as Aldershot Town got another chance to go ahead when Harrison Panayiotou got on the end of Lewis Kinsella’s cross, heading over the bar and fouling Johnson in the process.

Another good move came shortly after when Tanner released George Fowler who looked for Miller but his cross was brilliantly blocked before Tanner won a dangerous free-kick outside of the box. Tanner took it and produced an excellent save from James before James fumbled the corner and gathered the ball just in time before skipper Jamie Sendles-White could convert.

Hartlepool seemed to have awoken the phoenix out of the ashes with Aldershot Town pursuing the opener relentlessly as Kinsella’s corner found Miller just inside the penalty area but Miller’s effort went just wide of the target.

Shortly after, Aldershot Town had their backs against the wall when a flurry of clearances deflected to Oates who shoots from a tight angle but after a combination of Kodi Lyons-Foster and Mitch Walker, the ball fell safely into the arms of the keeper.

On the stroke of half-time, fantastic last-ditch defending from Fowler denied Hartlepool a certain goal as he blocked a goal-bound effort, throwing his body in front of the ball much to the appraisal from his teammates and the dugout.

Shortly after half-time, Hartlepool took the lead as Armstrong turned in the penalty area before firing towards goal before the ball smashed off Walker into the back of the net.

20 minutes from time, Hartlepool had an opportunity to double their lead when Oates was sent through on the right-hand side, crossing the ball into the box finding Armstrong who could only poke wide from close range.

Oates had another chance to double the lead for Hartlepool, this time with an effort on goal as he raced clear on the right-hand side before firing wide of the far post. Moments later, Hartlepool had two shots blocked off the line with Sendles-White blocking the first effort.

Hartlepool eventually doubled their lead when Featherstone’s free-kick found the head of Oates who did not miss this opportunity to head home.

Three minutes from time, Kinsella’s brilliant solo run towards Hartlepool’s penalty area gave him the opportunity to cross but the ball hit the arm of a Hartlepool defender with the referee pointing to the spot. Substitute Mo Bettamer stepped up to convert, firing the ball into the top right-hand corner.

Minutes later, Gavan Holohan was bundled over in the box with the referee pointing to the spot for Hartlepool before a scuffle between Holohan and Sendles-White occurred with the pair receiving yellow cards for their troubles.

With the situation calmed down, Featherstone stepped up and converted to Walker’s left-hand side to seal the three points for Hartlepool as the visitors rise to third whilst the Shots remain 15th. 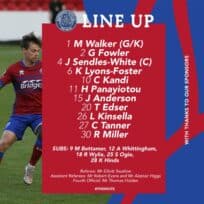