A deft finish from Toby Edser and a double from Josh Rees secured a second-half comeback for Aldershot Town in a six-goal thriller against Boreham Wood at the EBB Stadium in the National League.

Boreham Wood opened the scoring through a Giles Phillips own goal before Toby Edser’s clever flick grabbed an equaliser for Aldershot Town.

Moments later, Corey Whitely smashed home before Kabongo Tshimanga converted from the spot following a controversial decision from the referee. Aldershot Town got a goal back when Josh Rees volleyed into the far corner before Rees completed the comeback with a sidefoot finish.

Looking to build from the defeat to FC Halifax Town, Danny Searle made one change to the starting lineup ahead of our home game against Boreham Wood. Harrison Panayiotou starts ahead of Mo Bettamer whilst James Rowe returned to the squad on the bench.

Aldershot Town started the better of the two teams and Joel Nouble caused problems early when his lofted cross found the head of Panayiotou who had his effort cleared away before Rees’ volley was cleared off the line superbly.

The goalline clearance seemed to revitalise Boreham Wood who took the lead shortly after. Tyrone Marsh gathered the ball after a clearance and picked out Kane Smith who took the ball into his stride and squared it across the box with Phillips turning into his own net before Tshimanga could tap home.

Shortly after the goal, Aldershot Town had a chance to equalise through Ricky Miller. Ryan Hall played a brilliant goal-kick into the stride of Miller whose attempted lob from just outside the area went just over the bar.

Moments later, Aldershot Town came close again when the short corner was played to Alfy Whittingham who crossed the ball to Phillips who headed over the bar.

Just before half-time, Aldershot Town came close to the equaliser again. Edser’s free-kick was initially cleared before it came back to Edser who found Nouble who chipped the ball to the head of Rees whose header went just over the bar.

Aldershot Town started where they left off and came agonisingly close to finding the equaliser through Miller again. Edser played a wonderful reverse pass straight to the feet of Miller but his effort was blocked right at the last minute by Jamal Fyfield.

Aldershot Town got what they deserved shortly after when they found the equaliser through Edser. Miller brilliantly turned Fyfield despite the defender tugging his shirt before playing through Panayiotou who found Edser at the near post whose clever flick beat Nathan Ashmore in goal.

Moments later, Boreham Wood regained their lead when Whitely came in from the left-hand side and smashed past Hall. Boreham Wood then gained a controversial penalty minutes later when Hall allegedly brought down Tshimanga. Tshimanga converted the spot-kick to double the visitors lead.

It didn’t take long for Aldershot Town to get a goal back. Edser took the set-piece and the ball fell to Rees who fired a brilliant volley into the far right corner to keep the Shots in the game.

12 minutes from time, the comeback was complete with Rees securing his brace. Edser found Bettamer at the back post who outjumped Ashmore to head it down to Rees who sidefooted into the far bottom corner to find the equaliser.

Aldershot Town pushed for a late winner but honours were even in what was arguably one of the games of the season. 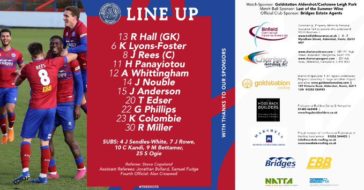