Goals from Harrison Panayiotou and Chike Kandi secured the league double over Wealdstone FC as Aldershot Town return to winning ways at the EBB Stadium in the National League.

Panayiotou opened the scoring with a great finish on his weaker foot before Kandi sealed the three points, smashing home from close range.

Looking to improve from our draw against King’s Lynn Town, Danny Searle made one change to the starting lineup with George Fowler coming in for Killian Colombie who is out of the squad.

The first opportunity of the game fell to Aldershot Town when Ricky Miller’s cross deflected out to Joel Nouble whose cross-shot was parried away from danger by Jake Askew and Wealdstone were able to clear.

Aldershot Town came close again when a Wealdstone defender misjudged the flight of the ball, allowing Miller to turn towards goal and shoot just wide of the post much to the frustration of Toby Edser who believed he should have been played through on the left-hand side.

Just over 10 minutes from the interval, Aldershot Town got their breakthrough through Panayiotou. A ball from the defence was misjudged from the Wealdstone defender before Panayiotou fired into the top corner on his weaker foot.

Just after half-time, Miller was played through on goal, creating space for himself before forcing a great save from Askew as Aldershot Town won a corner but it amounted to nothing as Wealdstone cleared.

A good move from Aldershot Town almost doubled their lead when Edser played the ball to Lewis Kinsella who crossed to an onrushing Fowler whose header looked certain to hit the back of the net but an excellent save from Askew denied the full-back.

Wealdstone were struggling to create any clear cut chances but they came close to the equaliser when Connor Smith found space in midfield before hitting from distance but the ball went wide of the far post.

Just under 20 minutes from time, Kaylen Hinds came agonisingly close to grabbing his first goal for the Shots when his header from an Edser cross was expertly saved by Askew before Edser’s second cross went over the bar.

Wealdstone had another opportunity to equalise when Dennon Lewis got in front of his defender before striking his half-volley over the bar from a tight angle.

Kandi had a chance to double Aldershot Town’s lead just before injury-time when he was played through by Hinds but his left-footed effort went over the bar. Moments later, Kodi Lyons-Foster’s header looked to be going in but again Askew was there to keep Wealdstone in the game.

In injury-time, Wealdstone came close to the equaliser but Mitch Walker was there to deny Danny Green with an excellent save before Aldershot Town were able to clear.

Aldershot Town eventually got that second goal to kill off the game at the end of stoppage time when Nouble’s brilliant piece of skill gave himself space in the box to find Kandi who smashed home from close range to seal all three points. 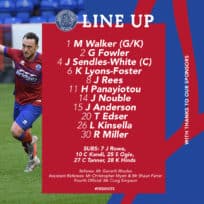