Goals from Mo Bettamer and Harrison Panayiotou gave Aldershot Town their second home win in the National League at the EBB Stadium in front of the returning home fans.

It was Aldershot who started on the front foot when Bettamer cut inside to fire into the far corner to give the Shots an early lead before Panayiotou tapped home from close-range to add the second.

Looking to build on from Tuesday’s draw against Chesterfield FC, Danny Searle made one change to the starting lineup as James Rowe replaced the suspended Alfy Whittingham who picked up a red card in the Chesterfield game.

Aldershot started the better of the two teams and got the advantage in the seventh minute of the game. Toby Edser fought back to win the ball in the middle of the park and place Bettamer through on the left-hand side and the Libyan international cut inside and fired into the far corner.

Shortly after, Edser had a great chance to double Aldershot’s lead when he hit a long-distance effort that went just wide of the far post before Shadrach Ogie was close to assisting Panayiotou but he could only head straight at the keeper.

The pressure paid dividends as Aldershot grabbed their second through Panayiotou who had a goal coming. A brilliant team goal that started with Rowe who played a wonderful cross to Bettamer who headed across goal for Panayiotou to tap home.

Chike Kandi came close to adding a third shortly after when he fired his effort wide of the far post. An opportunity missed to haunt his old club. Dagenham struggled all half to create any chances as Aldershot took a comfortable two-goal lead into half-time.

Shortly after the interval, Dagenham came close to getting a goal back but Giles Phillips was on the line twice to block goalbound efforts before Paul McCallum headed narrowly over the bar. Moments later, Edser almost grabbed another assist on the counter-attack but Panayiotou could only find the arms of Elliot Justham in goal.

Mitch Brundle was the next Dagenham player to have an opportunity when his shot from distance stung the fingertips of Brad James but James caught the resulting corner. Brundle had another chance moments later from close-range but James produced a brilliant save to deny a goal back for Dagenham.

Eighteen minutes from time, debutant Jermaine Anderson came off the bench to replace Rowe who had a stellar performance in the middle of the park for Aldershot. His first involvement was giving the ball to Bettamer who crossed to Kodi Lyons-Foster who had his header deflected wide of the far corner. The resulting corner was cleared by a Dagenham defender.

Substitute Joseph Hungbo came close to adding a third when Panayiotou broke through on the counter-attack and placed through Hungbo who cut inside and fired his deflected effort just wide of the near post. The resulting corner was defended well by Dagenham.

Hungbo was having an impact and he almost scored his first goal for the club as he cut inside and produced a good save from Justham before Josh Rees fired agonisingly wide of the far corner from outside of the box.

Dagenham had a chance to mount a late comeback when former Aldershot midfielder Dean Rance hit an effort from distance and James produced a wonderful save to tip the ball around the corner. Shortly after, Rance got his goal with a header from close range in the final minutes of the game to serve up a nervy finish.

Late pressure from Dagenham wasn’t enough to complete their comeback and Aldershot held on to earn their second home win of the season and their first with the return of home fans. 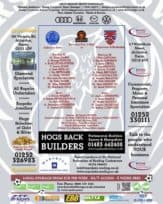