Despite Harrison Panayiotou’s brace, goals from Bromley’s Michael Cheek, James Alabi and Joe Kizzi kept alive their play-off hopes as Aldershot Town were unlucky not to come away with a point at the EBB Stadium.

National League top-scorer Cheek opened the scoring with a close-range finish before Panayiotou equalised with a header.

Alabi’s header regained the lead for Bromley before Panayiotou once again equaliser with a header.

Right at the death, Kizzi’s header secured a vital three points for Bromley in their playoff pursuit.

Looking to improve from our defeat against Eastleigh FC, Danny Searle named two changes to the starting eleven with Kaylen Hinds making his first start for the club and Ryan Hall making his second start in goal this season.

Early in the first half, skipper Jamie Sendles-White came close to opening the scoring as his volley ricocheted off a Bromley defender and over the bar. Shortly after, Craig Tanner carried the ball from midfield with George Fowler running alongside him but Tanners opts for a shot but drags his effort wide of the far post.

However, it was Bromley who took the lead in the 28th minute through top-scorer Cheek who tapped home from close range after Hall had denied the first opportunity.

Moments later, Aldershot Town came close to the equaliser when good play from Tanner and Joel Nouble allowed the latter to cross to the head of Hinds who just couldn’t get enough power on the header and Mark Cousins collected.

Minutes later, Bromley had the opportunity to double their lead when Jude Arthurs was sent through on goal but somehow placed his effort wide of the post but the linesman had flagged for offside shortly after. Nouble was growing into the game and he was close to getting a goal to his name when his drive from midfield have himself the space to shoot but his effort went wide of the far post.

Panayiotou had the chance to grab the equaliser when Lewis Kinsella’s ball was controlled beautifully but the striker couldn’t keep his effort down as it rose over the bar.

Shortly after half-time, a one-two with substitute Mo Bettamer and Panayiotou gave the latter space to pick out Tanner on the right-hand side who cut inside on his left foot to test the palms of Cousins who pushed the ball around the far post.

Excellent football between Kinsella and Nouble allowed the latter to drive down the left-hand side, beating two men in the process before his low cross found Tanner who had his effort blocked off the line by a Bromley defender.

After Nouble’s brilliant work winning a free-kick, Kinsella lofted the ball into the area and found the head of Kodi Lyons-Foster who headed the ball on to find Bettamer but Cousins was there to deny Aldershot Town again with a good save.

Aldershot Town were regaining their confidence and found a deserved equaliser in the 71st minute through Panayiotou. Nouble’s delightful dinked ball found Panayiotou in the penalty area who guided his header into the far bottom corner.

Minutes later, Bromley regained their lead through substitute Alabi after good skill down the right from substitute Harry Forster allowed the space to get a cross in and find the unmarked striker who headed home from close range.

Aldershot Town thought they had found the equaliser yet again shortly after when Nouble’s effort was saved by Cousins and rebounded in by Bettamer but the linesman flagged for offside.

Aldershot Town would be celebrating moments later though as Fowler’s cross found an unmarked Panayiotou who headed home from close range once again to grab his double and Aldershot Town’s second of the game to equalise.

Aldershot Town came close to taking the lead minutes later when Bettamer’s effort from a tight angle crashed off the crossbar before Bromley were able to clear their lines. Moments later, Toby Edser was unlucky to be denied by Cousins who smartly saved from close range.

In the dying minutes of the game when Aldershot Town pushed for a late winner, Bromley were the ones that got a last-minute winner when Kizzi headed home from close-range to keep their play-off hopes alive. 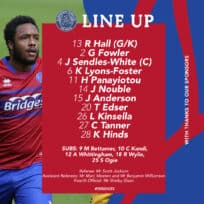