Nouble opened the scoring for Aldershot Town with a lovely curling effort past Tony Thompson before Josh Hancock equalised from the penalty spot.

Two minutes from time, Kandi’s exquisite first-touch gave him the space to fire into the far corner and secure all three points for the Shots.

Looking to build from the defeat to Hereford FC, Danny Searle named five changes ahead of our home game against Altrincham. Ryan Hall made his National League debut in goal with Mo Bettamer returning to the lineup. Killian Colombie returned from suspension to start. James Rowe was not part of the squad whilst Shadrach Ogie drops to the bench.

The first chance of the game fell to Ricky Miller after brilliant play from February’s player of the month Joel Nouble as he played through Miller who cut inside to shoot but his effort was blocked. Bettamer tried to score from the rebound but his effort went over the bar.

Nouble was involved again when Aldershot Town were on the counter-attack and his cross into the area found Bettamer who just couldn’t get enough on his effort to trouble Thompson in the Altrincham goal.

Aldershot Town were dominating the opening 20 minutes with Nouble having a great game. This time, he almost opened the scoring as his driving run bamboozled the Altrincham defence before his effort at the near post was smartly saved by Thompson.

Altrincham had their first real chance of the half just after the 30-minute mark when Joel Senior’s effort from distance whistled past the post. Aldershot Town responded soon after when Miller’s effort went wide of the far post.

Just before half-time, Aldershot Town got a deserved lead through Nouble who continued his fine form for the Shots. Nouble gathered the ball on the left-hand side before cutting inside and curling a wonderful effort past Thompson.

Moments after the break, Altrincham came close to levelling when the corner came in from Ryan Colclough and found Toby Mullarkey who headed the ball off of the crossbar. Shortly after, Colombie brought down an Altrincham player inside the box and Josh Hancock converted for the visitors.

Aldershot Town grew back into the game following Altrincham’s equaliser when Josh Rees fired narrowly over the crossbar from a corner that was initially cleared away by the visitors. Altrincham replied with a Yusifu Ceesay effort that forced a good save from Ryan Hall.

Colclough was involved again for Altrincham when he dispossessed Alfy Whittingham and raced down the left-hand side before firing a low effort just wide of the far post.

In the final minutes of the game, Aldershot Town regained their lead through substitute Kandi. A great run from Colombie allowed the full-back the space to pick out a pass and find Kandi whose excellent first touch set him up beautifully for a cool finish into the far corner.

Altrincham piled on late pressure forcing an excellent save from Ryan but Aldershot Town held out for a vital win that secured three National League wins on the bounce. 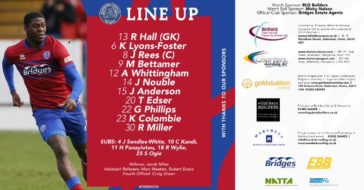