Aldershot Town fail to progress to the first round of the FA Cup on derby day in a 2-1 loss at home to Woking at the EBB Stadium on Saturday evening.

It was the Shots who got the advantage early in the game through Mo Bettamer’s sliding effort before Josh Davison grabbed the equaliser just before the interval.

With just over 10 minutes to go, Max Kretzschmar fired the visitors in front to book Woking’s place into the first round of the FA Cup.

Looking to improve from Saturday’s entertaining 2-2 draw against Eastleigh, Danny Searle made one change as Harrison Panayiotou made way for Ross McCormack who made his first full debut. Academy graduates Joe Rabbetts and Reece Wylie made the bench.

The game was very even but Aldershot Town were the ones that were rewarded with a perfect start just seven minutes in. James Rowe played the ball out wide to Shadrach Ogie who did well on the left-hand side to beat his man and find in-form Bettamer in the box to slide home.

Woking were very shaky in the opening ten minutes as a mishit clearance almost gave McCormack the perfect opportunity to grab his first goal for the club but Craig Ross reacted quickly to prevent an embarrassing moment for the Woking defence.

Woking were struggling to create anything as they were limited to half-chances and long-distance efforts. One came from Woking captain Josh Casey but his effort went straight into the arms of Mitch Walker.

The game began to get heated but Craig Tanner almost scored his second free-kick in two games as he tested Ross with a low drive towards the far post. Woking had a free-kick just moments later but Charlie Cooper fired wildly over the bar.

McCormack came close again to scoring for the first time in Aldershot colours but his effort was well saved by Ross and he was flagged for offside. The Scotsman had to depart the field early though as he picked up an injury just before half-time.

Just before the interval, Woking grabbed an equaliser when Davison was played through on goal before he kept his composure and slotted home for the visitors to score on his debut.

Aldershot almost repeated their perfect start in the second-half as Bettamer’s header from Tanner’s free-kick found an unmarked Kodi Lyons-foster to head home in the far corner but the flag was raised for offside.

The heated affair continued when Woking’s Ben Dempsey picked up a yellow card after a series of fouls from both sides. Substitute Kretzschmar was the next Woking player to go into the book shortly after.

Aldershot’s missed chances were rued when substitute Kretzschmar broke free of Ogie and raced clear on goal to slot past the onrushing Walker and give Woking the lead for the first in the game with just over 10 minutes to go.

Aldershot came close to the equaliser just minutes later when Fowler had the freedom to cross on the right-hand side once again and this time he found an unmarked Josh Rees who headed agonisingly wide of the far post.

Aldershot had a few chances at the end of the game to grab an equaliser but Woking held on to progress past the 4th qualifying round into the 1st round of the FA Cup. 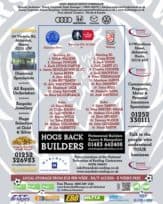