Despite a great early start through Craig Tanner, Aldershot Town were beaten 4-1 by Torquay United at the EBB Stadium.

It was Aldershot who took the advantage first through birthday boy Tanner’s neat finish before Ben Wynter’s cross was fumbled into the back of the net by Mitch Walker under pressure from Josh Umerah.

Just after the interval, Torquay took the lead through a Danny Wright header before they doubled their lead through Ben Whitfield’s solo curling effort.

Torquay added a fourth through Wright who grabbed his second of the evening with a rebounded effort to secure three points for the visitors.

Looking to make amends from Saturday’s FA Cup exit to fierce rivals Woking, Danny Searle made one change to the starting lineup as Ross McCormack made way for Chike Kandi. Harrison Panayiotou missed out again due to an injury picked up away to Eastleigh.

Aldershot got the first opportunity of the game when Kodi Lyons-Foster chipped the ball through to Kandi who gave the ball to Shadrach Ogie who found Mo Bettamer unmarked in the box but his header could only find the arms of Lucas Covolan.

Shortly after, there was another chance for Aldershot as Tanner curled a wonderful corner to find the head of Lyons-Foster but he couldn’t quite direct his effort on target as the ball went narrowly over the bar.

Torquay got their first opportunity of the game as they went up the other end from their goal kick and Whitfield gathered the ball in midfield and hit one from distance which went narrowly wide of Walker’s left post.

Aldershot wouldn’t rue their missed chances as a shot from distance ricocheted to Josh Rees who laid it on a plate for birthday boy Tanner to take the ball in his stride and poke the ball past the onrushing Covolan to give the Shots another early lead.

The Shots came close to getting a second just moments after when Kandi and George Fowler combined on the right to find Rees in the middle who placed his effort just wide of the near post from close range. That wasn’t the end of it as Kandi burst forward with the ball again before cutting inside and seeing his effort smartly saved by Covolan.

Aldershot were piling a lot of pressure on the Torquay defence and they were dominating the opening 20 minutes of the half with Torquay struggling to create chances as they couldn’t resist the Shots’ pressing and physicality.

The Shots’ physicality certainly showed when captain Jamie Sendles-White picked up the first yellow card of the game for a strong challenge on Whitfield in the middle of the pitch.

The game began to get heated with both sides putting in strong tackles repeatedly. James Rowe and Sendles-White were involved in the thick of it and assistant manager Anwar Uddin picked up a yellow card for arguing a controversial decision made by the linesman.

Torquay struggled to show their creative side and looked a shadow of their usual selves but they managed to get back into the game just before the interval. Wynter’s cross looped high into the area and Umerah challenged the ball with Walker and the ball found its way into the back of the net.

Aldershot’s dominance from the first half wasn’t replicated in the early minutes of the second half when Torquay took the lead for the first time in the game. The ball was worked well on the right-hand side and crossed into the box to find an unmarked Wright who headed into the bottom corner.

Torquay were gaining confidence and they doubled their lead just moments after when Whitfield gathered the ball in midfield and cut inside to curl the ball into the far corner from outside the box.

Torquay went close to getting a fourth with just over 20 minutes to go when Wright was found free with a cross once again but the forward could only send his header narrowly wide of the far post.

Lyons-Foster had an opportunity to get a goal back for Aldershot after a deft flick from Alfy Whittingham but his effort was blocked by the Torquay defender. Shortly after, substitute Finney had to leave the field of play after picking up an injury and Killian Colombie was brought on to play for the last ten minutes of the game.

Aldershot put on a lot of late pressure towards the Torquay defence but Wright scored his double late on with a rebounded effort to deny any chance of a comeback for Aldershot and secure the victory for the visitors. 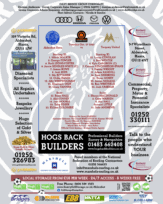