Despite a late goal from Josh Rees, Aldershot Town fell to defeat against Solihull Moors thanks to goals from Jamie Ward, Alex Gudger, and Adam Rooney at the EBB Stadium in the National League.

Ward opened the scoring for Solihull before Gudger doubled their lead just before half-time. Rooney killed the game off with a deft finish at the near post before Josh Rees got a consolation goal outjumping Ryan Boot to the ball to head over the line.

Looking to build from the stalemate against Stockport County, Danny Searle named an unchanged starting lineup from Saturday’s game.

The first opportunity of the game fell to Solihull from a corner as Jordan Cranston’s set-piece almost found its way into the back of the net going narrowly wide of the far post.

Aldershot Town got a chance of their own shortly after when Dinesh Gillela linked up well with Ricky Miller before Gillela found Miller again who controlled well but couldn’t find the target as his effort went over the bar.

In the opening 15 minutes, Solihull had the ball in the net from a corner when a flurry of Solihull players threw themselves towards the ball bundling it over the line. The Aldershot Town players were adamant that a Solihull player had handled the ball and referee Daniel Lamport disallowed the goal.

Moments later, Solihull took their second chance to score through Ward. The ball was played to Rooney who turned away from his defender to assist Ward who cut inside onto his right foot to bend his effort into the far bottom corner beyond Mitch Walker.

Aldershot Town had a chance to equalise after brilliant footwork from Joel Nouble on the left-hand side, beating two Solihull defenders to set up Rees who couldn’t get the ball out of his feet and produced a snapshot that went agonisingly wide of the near post.

Solihull came close to doubling their lead through a direct corner. The inswinging corner came dangerously close to going all the way in as the ball hit the top of the crossbar and went out of play for a goal kick.

The game was back and forth in the first-half and Aldershot Town were next to come close to scoring. A high ball from Gillela was battled well by Toby Edser and the ball fell to Nouble whose tricky feet bamboozled the Solihull centre-half before producing a good save from Boot.

Aldershot Town rued their missed chances on the stroke of half-time when Gudger doubled Solihull’s lead. A corner from Cranston came in and the ball bundled around the area falling to Gudger who smashed home from just a few yards out.

Shortly after the interval, Solihull came close to finding their third of the game when the corner was played short before the cross was cleared away by the Aldershot Town defence after Walker just about stopped the ball from going over the line.

Not long after, Solihull got their third through Rooney. A controversial free-kick was taken by Cranston who crossed low towards the near post to find Rooney who flicked the ball past Walker from close range.

Aldershot Town had a chance to get themselves back into the game when substitute James Rowe tested the palms of Boot from a direct free-kick with Nouble inches away from the ball which would have given him the chance for a rebound.

Aldershot Town deservedly got a goal back through Rees. Nouble did brilliantly on the right-hand side to cut inside and hit an effort on goal which deflected into the path of Rees who got to the ball first to head home despite the calls from Boot for a foul.

Rees’ goal wasn’t enough to mount a comeback as Solihull came away with all three points on their travels. 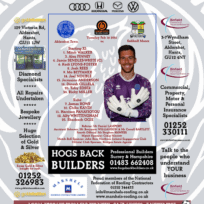