Ricky Miller’s first goal at home for Aldershot Town was cancelled out by Michael Gash’s equaliser as the spoils were shared against King’s Lynn Town at the EBB Stadium in the National League.

Miller opened the scoring with a wonderful curling effort before Gash equalised with a close-range strike.

Looking to improve from our defeat against Barnet FC, Danny Searle made three changes to the starting lineup. Killian Colombie and Miller return to the first 11 with Lewis Kinsella making his first start of the season following his return from a long-term injury.

Aldershot Town started the brighter of the two teams and almost got the opener when Colombie’s ball across the box evaded Harrison Panayiotou and Miller who couldn’t quite get on the end of it despite their best efforts.

King’s Lynn Town had an opportunity of their own minutes later when Cameron King’s cross almost found the head of Gash but Kinsella’s last-ditch tackle denied a certain goal for Gash who appealed for a penalty due to a high foot but the referee waved away his claims.

King’s Lynn Town came close again when Michael Clunan played a one-two before hitting a close-range half-volley over the bar.

Despite King’s Lynn Town’s attacking advances, Aldershot Town took the lead through Miller. Skipper Jamie Sendles-White’s chipped ball found Panayiotou who chested the ball down brilliantly to cross to Miller who initially lost the ball but regained possession to curl a wonderful strike into the far corner.

King’s Lynn Town came forward again shortly after our goal with Kinsella blocking an effort from outside the box before Sonny Carey’s effort from distance whistled past the far post.

Aldershot Town had two penalty shouts in the space of a minute shortly before half-time when Miller appeared to be tripped when trying to get on the end of Panayiotou’s cross before Josh Rees was held when it looked certain he would head home to double Aldershot Town’s lead. Both were waved away by the referee.

Shortly after half-time, brilliant play from Aldershot Town nearly doubled their lead. A succession of one-twos between the midfield and forwards saw the ball fall to Panayiotou who headed the ball down for Toby Edser who couldn’t keep his volley down as the ball went over the bar.

Aldershot Town would rue their missed chances when King’s Lynn Town equalised in the 60th minute through Gash. Substitute Alex Kiwomya was sent through on goal and squared the ball to Gash who slotted home past Mitch Walker.

King’s Lynn Town came close to taking the lead but brilliant defending from Kodi Lyons-Foster and Kinsella denied Gash a second goal with Lyon-Foster blocking his effort before his rebound effort was blocked on the floor by Kinsella.

Both sides pushed for a winner but both defences were resolute with the points shared at the EBB Stadium. 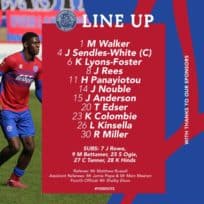