Despite taking the lead through a Mo Bettamer penalty, a double from Jake Hyde and a wonder-strike from Nyal Bell completed a FC Halifax Town comeback in the National League at the EBB Stadium.

It was Aldershot who got the lead after 36 minutes on the clock when Mo Bettamer converted his spot-kick after Harrison Panayiotou was brought down in the area by Martin Woods before Jake Hyde grabbed the equaliser for the visitors.

The game changed after the equaliser and Halifax took the lead with Nyal Bell’s curling effort before Hyde doubled their lead with his conversion from the penalty spot.

The first opportunity fell to Aldershot from a direct free-kick as James Rowe hit his set-piece from distance and came agonisingly close to giving the Shots an early lead. Another chance came to Giles Phillips following great footwork from Chike Kandi with the cross to match but the on-loan Wycombe Wanderers man couldn’t get enough power on his header.

Aldershot came close again after brilliant work by Josh Rees to beat his man and loft a wonderfully bent through ball to send Panayiotou through on goal but he could only fire just wide of the far post.

Another flurry of chances came Aldershot’s way in a dominant first 20 minutes for the hosts. Bettamer’s effort was parried away by Sam Johnson before Toby Edser fired wide of the near post with the rebound.

Halifax were struggling to create any clear-cut chances for themselves and the game started to go quiet after Aldershot’s early dominance until Panayiotou was brought down in the penalty area. A clever free-kick from Rowe picked out the striker and the tackle was mistimed by Woods to give away a clear spot-kick.

Bettamer stepped up and converted nine minutes before the interval, sending Johnson the wrong way and firing the ball into the bottom left corner to maintain his consistent goalscoring exploits this season. The penalty was Aldershot’s first of the season.

Aldershot started where they left off in the first half and they came close to grabbing a second through Kandi. A brilliant one-two between Bettamer and Panayiotou allowed Bettamer to give the ball to Kandi on the right hand-side but the forward hit his effort wide of the near post.

Another chance fell to the hosts when Rowe did brilliantly to pick out Bettamer who chested the ball down to Edser who played through Kandi but his shot went narrowly wide of the near post following a deflection off a Halifax defender.

Halifax came back into the game and they got their first breakthrough through Hyde’s headed equaliser. The free-kick came in and Hyde rose the highest to head home for the visitors.

Moments later, Halifax took the lead with their confidence boosted by the equaliser. Bell turned on the edge of the area and fired an unstoppable effort into the top left-hand corner. The game had changed drastically in just a few minutes and the visitors were piling on the pressure.

Phillips appeared to have brought down a Halifax player in the box and that sparked angry reactions from the away side with Phillips in the thick of it and the defender was given a yellow card. The players were cleared from the area and Hyde stepped up to grab his second of the game sending James the wrong way.

In the later stages of the game, Edser came close to getting a goal back for Aldershot when he hit the bar from outside of the area before Joseph Hungbo’s cross almost beat Johnson at the near post but the ball hit the side-netting.

Aldershot pushed for a comeback and came close to reducing the deficit through a Rees header but Halifax held onto their lead and gained all three points on their travels. 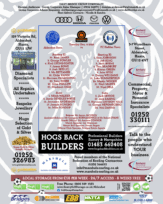