Wynter opened the scoring for Eastleigh with a close-range effort before Panayiotou equalised with a low finish.

Eastleigh regained their lead when Boyce fired home from a long-distance before Tomlinson finished from close range.

Looking to improve from our defeat against Hartlepool United, Danny Searle named two changes to the starting eleven with Joel Nouble and Mo Bettamer returning to the starting line-up. Ricky Miller and Chike Kandi were dropped to the bench.

The opening 15 minutes of the game were tight between both sides with both sets of players struggling to breach either side’s defence.

Aldershot Town started to press the Eastleigh defence and they came close to the opening goal when Toby Edser’s long ball found the feet of Nouble who laid off Lewis Kinsella to shoot from range but his effort deflected wide of the far post.

A succession of corners would follow for Aldershot Town with one of the corners nearly catching out Joe McDonnell in the Eastleigh goal with a deflection off an Eastleigh defender but the ball rolled narrowly wide of the far corner.

Shortly after a period of good chances for Aldershot Town, Eastleigh took the lead when Jack Payne’s corner could not be cleared by the Aldershot Town defenders and the ball fell kindly to Wynter to poke home from close range.

Brilliant play from Aldershot Town almost earned the equaliser with the move starting with skipper Jamie Sendles-White and finding its way to Bettamer who played a clever reverse pass to release Harrison Panayiotou whose was denied by a last-ditch tackle from an Eastleigh defender.

Eastleigh had a good opportunity to double their lead just before half-time when Tyrone Barnett was played through on the counter-attack and drove towards the Aldershot Town penalty area before cutting inside and firing over the bar.

Just after half-time, Aldershot Town came firing out of the blocks and they got a deserved equaliser through Panayiotou. Dazzling skill from Craig Tanner allowed the space to fizz a low pass into Panayiotou who turned to calmly slot the ball into the far corner on his weaker foot.

Shortly after, a lovely piece of skill from Tanner released George Fowler on the right-hand side but his attempted cross was blocked with the clearance falling to Tanner who tried to find an Aldershot Town man in the box but the cross was overhit and went out for a goal kick.

Despite pressure from Aldershot Town, Eastleigh took the lead again when Boyce took a touch and unleashed a strike from about 30 yards, finding the back of the net. 11 minutes later, Eastleigh doubled their lead when Substitute Sam Smart’s low cross found Tomlinson who powered his effort into the near corner.

Aldershot Town applied late pressure to get back into the game but Eastleigh came away with the three points and keep their playoff hopes alive, rising to 9th whilst the Shots fall to 16th. 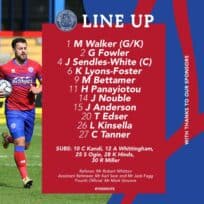