10 men Aldershot Town’s unbeaten run in all competitions comes to an end against Weymouth thanks to Andrew Dallas’ brace at the EBB Stadium in the National League.

Dallas got the opener for Weymouth with his headed goal before Mitch Walker was sent off for handball shortly after. Dallas secured his double with a composed finish just before the interval.

Looking to build on from Saturday’s win against Wealdstone FC, Danny Searle made two changes to the starting lineup with Killian Colombie and Jamie Sendles-White coming in for Kodi Lyons-Foster and George Fowler. Ricky Miller remains out due to injury and Harrison Panayiotou is on the bench.

Aldershot Town had the first opportunity of the game when Shadrach Ogie’s long throw deflected off a  Weymouth head and forced Ethan Ross to parry over. Moments later, the corner came to Jermaine Anderson who looked to have curled his effort into the far bottom corner but the Weymouth defender cleared off the line.

Shortly after, Weymouth had a chance when Dallas was played through on goal but Mitch Walker was there to deny him from breaking the deadlock and the Aldershot Town defence were able to clear.

Chike Kandi was the next Aldershot Town player to have a chance but his swivelled effort went narrowly wide of the near post.

Dallas was causing problems for the Aldershot Town defence and he grabbed his goal with his second chance of the game. The cross came back into the box after being initially cleared and Dallas redirected his header over Walker into the far corner.

Dallas was through on goal again and Walker rushed off his line but he appeared to move his hand towards the ball when Dallas attempted to go around him and Walker received a red card for his troubles. Brad James came on with Kandi being taken off.

Weymouth were piling on the pressure and Sean Shields nearly got a second for Weymouth but James was there to palm around the post. The corner came in and James held well, being fouled in the process by a Weymouth player.

Aldershot had a chance of their own shortly before the interval when Ogie found the ball in his possession but he could only fire the ball over the bar. However, Weymouth kept on searching for the next goal and they found it through Dallas who raced clear on goal to slot past James and double Weymouth’s lead.

Aldershot Town started to pile on the pressure but they just couldn’t create a clear cut chance to get back into the game. The game started to become more even between both sides in the first 15 minutes of the second-half with Toby Edser attempting an overhead kick but Ross held comfortably.

Aldershot Town almost reduced the deficit when Edser played through Mo Bettamer who attempted to play through Anderson but the ball just ran away from him and Ross gathered. Shortly after, it was Bettamer’s turn to have a chance on goal from a direct free-kick but his effort went wide of the far post.

Despite late pressure from Aldershot Town, their unbeaten run of three games in all competitions comes to an end. 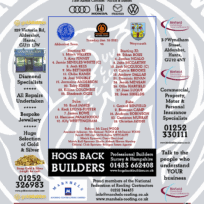