10 men Aldershot Town held onto a draw as they cancelled out Maidenhead United to go three games unbeaten in the National League at the EBB Stadium.

New signing Mike Fondop was sent off in the later stages of the game after confrontations from both sets of players but the hosts held on for an all-important point.

Looking to build on from Saturday’s win against Altrincham FC, Danny Searle made one change to the starting lineup as newly recruited Joseph Hungbo made way for Chike Kandi. Mo Bettamer returned to the squad from international duty after scoring on his debut for Libya against Equatorial Guinea.

The first chances of the game came to Aldershot Town as Harrison Panayiotou played through Kandi whose lovely footwork allowed him to test Taye Ashby-Hammond in goal before Panayiotou headed narrowly over shortly after.

Aldershot were close to going ahead when Kandi’s tricky feet allowed him to set up Toby Edser who could only fire just wide of the far post. All the pressure was coming from Aldershot as Maidenhead were struggling to create chances.

Alfy Whittingham was the next player to have a chance for Aldershot but he fired wide of the near post after Maidenhead couldn’t clear their lines following pressure from Panayiotou.

The momentum of Aldershot was paused when Dan Sparkes had to be treated after pulling a muscle when running after the ball. Sparkes was replaced immediately by substitute Josh Coley.

Maidenhead had their first opportunity of the game when Rohan Ince headed the ball back into the area after an Aldershot clearance and Shaun Donnellan hooked the ball straight into the hands of Bradley James.

Aldershot came close shortly after the break when Shadrach Ogie’s cross caused mayhem in the box but the Maidenhead defence were able to block the efforts on goal and get themselves out of danger. Moments later, Edser’s free-kick went narrowly wide of the far post following a deflection off a Maidenhead player.

The game began to get feisty and the first big decision of the game came late into the second-half as a bundle for the ball on the ground caused confrontations amongst both sets of players and Fondop was controversially sent off with Maidenhead defender Manny Parry avoiding the same punishment with a yellow card.

Panayiotou had a chance to give 10 men Aldershot the lead but he could only fire narrowly wide of the far post after Whittingham’s long-range effort was parried in his direction.

Late pressure from Maidenhead wasn’t enough as the defence of Aldershot stayed resolute for the point despite being down to 10 men. 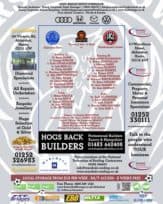