A close-range strike from Alex Whittle was enough for Chesterfield FC as Aldershot Town’s unbeaten home run comes to an end at the EBB Stadium in the National League.

Chesterfield scored the only goal of the game through Whittle when he fired home from close range.

Looking to build from our draw to Boreham Wood, Danny Searle made four changes to the starting lineup ahead of our home game against Chesterfield FC. Mitch Walker returned in goal for the Shots replacing Ryan Hall whilst Shadrach Ogie returned to the starting lineup. George Fowler returned from injury to reclaim his right-back spot with Killian Colombie on the bench whilst Mo Bettamer earned a start after his impact against Boreham Wood from the bench.

Despite the pressure, Aldershot Town had on the Chesterfield defence, Chesterfield took the lead through Whittle. The cross came in from Jack Clarke on the right-hand side and despite the best efforts of Walker, he parried the ball into the path of Whittle who fired home.

Chesterfield’s confidence boosted after their goal and they nearly doubled their lead when a free-kick almost caught out Walker who palmed from safety.

Aldershot were starting to come back into the game and they came close to the equaliser five minutes before the interval. A long throw from Shadrach Ogie found the head of Bettamer who produced a good save from Grant Smith.

Just before half-time, Aldershot Town were agonisingly close to equalising. Toby Edser’s free-kick found the head of Giles Phillips who headed down to Josh Rees allowing the midfielder to produce an excellent save from Smith before the rebound went over the bar from close range.

Aldershot Town started exactly where they left off and came close again. Brilliant work by Ogie allowed the full-back to find Bettamer at the back post whose header was superbly cleared off the line before the linesman flagged for offside.

Another chance for Aldershot Town came with 20 minutes left on the clock with Rees heading just wide of the far post from Edser’s set-piece before Ricky Miller came close to flicking a headed clearance goalwards but the ball was just out of his range.

Aldershot Town pushed for a late equaliser but Chesterfield held out for a 1-0 win which takes them to 10th in the National League whilst the Shots sit in 15th place. 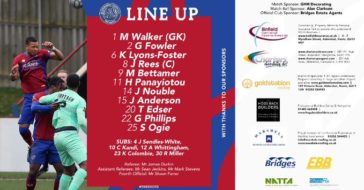