On Saturday, Jayden Harris scored within the first 30 seconds to give The Shots a fantastic start to proceedings, however, at The Snows Stadium tonight, it was Totton’s turn to score early.

Tyler Cordner was caught in possession just outside of his own box on the left side by Jireh Oyebamiji who then centred the ball to Ethan Taylor. Taylor’s shot was blocked but bounced over Luca Ashby-Hammond and in.

The Shots got back into the game 10 minutes later through an unlikely source when Archie Davies made it 2-1. The right-back blitzed down the right wing and finshed brilliantly into the far-bottom corner.

inih Effiong then twice came close to equalising for Aldershot in quick succession. First, his header from a great Joe Partington cross was well saved before less than a minute later, flashing a shot across the face of goal.

and, just before half-time, the skipper stepped up to make sure his side went into the break level. Lining up a free-kick from about 25 yards out, Partington picked out the very top corner giving Lloyd Thomas no chance in the Totton net with an incredible strike. 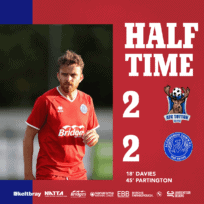 There were goals and action aplenty in the first-half, but sadly, the second-half didn’t live up to the expectations set by the first 45.

Effiong had the ball in the net just before the hour but the referee had already blown for a handball as the striker controlled it so the goal did not count.

The Shots carried the momentum from recovering a two-goal deficit and looked the most likely out of the two sides to score a third. After the hour mark, Francis Amartey and Trialist A came close.

Substitutions then began to flurry and the game ebbed out with barely a chance for either team in the closing stages.