On Saturday, Aldershot Town travel north to Edgeley Park to take on 5th placed Stockport County, in the first meeting between the two clubs since 2011.

Shots Squad:
Shots boss Danny Searle has freshened up his playing squad again this week, with the loan signing of Crawley Town’s Jack Powell. Powell, who will play for the Shots at least until January, is a central midfielder who scored 10 goals in each of Ebbsfleet United’s first two seasons in the National League, before spending last season with relegated Maidstone United. Searle also gave young Shots Academy player Reece Wylie a first team squad number last week and named him on the bench for the 2-1 home defeat to Barrow. Loan signings Max Hunt (Derby County) and Alex Fletcher (Plymouth Argyle) both made their debuts as substitutes against Barrow and are pushing for a start at Edgeley Park, whilst Harry Panayiotou returns to the squad after international duty with St Kitts & Nevis. Alex Finney, Ollie O’Dwyer, Jacob Berkeley Agyapong and James Rowe all remain unavailable to Searle due to injury. 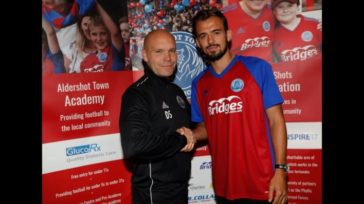 Stockport County Football Club were formed in 1883 as Heaton Norris Rovers, switching to their current name seven years later. Known to their fans as The Hatters (after the town’s hat making industry) County have played at Edgeley Park since 1902.

They became a Football League club in 1900 and competed in it continuously from 1905 to 2011. The team spent most of their history in the lower reaches of the Football League, but the 1990s were more successful, with the club competing in the top flight for five seasons, reaching the League Cup semi-finals in 1996–97.

Following relegation from the football league after the 2010-11 season, County started 2011-12 in the National Conference and at the end of their second season, were relegated to the Conference North. Last season, they were promoted as Champions and have begun this season well, with 17 points from their first ten games.

The Gaffer:
51-year-old Jim Gannon started and finished his playing career in Ireland, but spent the majority of his professional appearances in the English Football League for Stockport County. He is in his third spell as Hatters manager, having also spent time as the club’s Director of Football.

Playing Squad:
Gannon has shown great faith in last season’s title winning squad, keeping 18 of them at the club. He lost the services of left back Scott Duxbury to AFC Fylde and top scorer Matty Warburton to EFL side Northampton Town. A couple of new players signed and that number has doubled in recent weeks, with Gannon firstly bringing in striker Joe Piggott on loan from Wigan Athletic. Just this week, Winger Jake Kirby, who has been plagued with a succession of injuries, decided to take a break from football and Gannon has brought in the perfect replacement, in Harrogate Town Winger Joe Leesley. Leesley assisted a staggering 45 goals and scored 36 across two seasons in the National League North between 2016 and 2018. The only County player certain to be missing from County’s line-up on Saturday is injured striker Frank Mulhern.

Referee:
Saturday’s referee is Andrew Kitchen. He has refereed 3 National League matches this season, showing 8 yellow cards and no red cards to date. He has not taken charge of any Aldershot matches yet.

Commentary:
There will be live BBC Surrey Sport commentary of Saturday’s game, with Rob Worrall and former Shots striker John Grant, from 2:50pm. To interact with the commentary team, tweet @RobShot66.