Aldershot Town took part in the London 2020 Marathon Remix challenge set by Myles Anderson and his cause “Moving With Myles For The NHS” on our #FitnessFriday 22nd May!

We were nominated by Hartlepool United to cover as many marathons as possible as a club in a day, whether that’s running, walking or cycling. We managed to pull together to form four teams to raise a total, from us as a club with all donations considered, of nearly £200! We covered 114 miles over the course of the day as a group of supporters and players!

First team players Alefe Santos, Alfy Whittingham, James Rowe and George Fowler all did their part on the day.

Myles Anderson also hosted an Instagram Live in the evening which included a couple of these faces to talk about the day.

They were joined by a number of supporters who came together to cover the miles and donate generously to support the NHS! 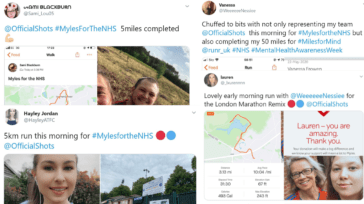 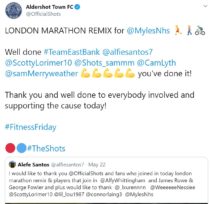 Nona and her team set out to do the marathon between her and four others, which they succeeded in doing. Nona herself managed to accomplish an very impressive 13 mile run! 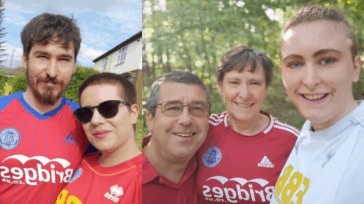 A special shout out to our final team of Alfy Whittingham, Myles Anderson ad his sister Hollie as well as supporter Jack who covered 7 miles!

We’d like to thank everybody who took part and we hope everyone enjoyed coming together to help such a great cause! If you’d like to donate to Myles’ page then click the link below: