Here’s how they got on:

The Welshman got off to a flying start in his first Farnborough appearance, scoring the goal of the game and picking up the Man of the Match award in the drubbing over Kings Langley.

The 19-year-old winger made only his second outing in the League win at Dorchester Town’s 3G, playing a part in a right-sided move that lead to a crucial equaliser, before featuring in Boro’s 2-0 home victory over Tiverton Town last weekend. 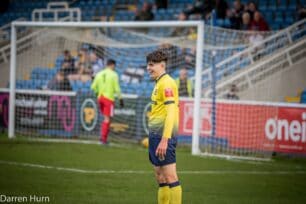 Ibby Akanbi made his competitive debut for Dagenham & Redbridge in the Daggers’ 2-2 draw with high-flying Chesterfield at the Chigwell Construction Stadium.

Akanbi appeared from the bench in the 75th minute, with the game level at 2-2, after the east London side had gone two goals up, before the Spireites fought back to level the game.

The forward proved a useful target man as both teams searched for a winner, but the game ended in a stalemate, with the points shared. 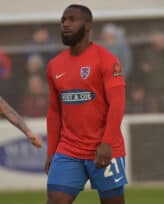 Our latest centurion made his first appearance for Maidstone United in their 0-0 draw away to Dulwich Hamlet, keeping a clean sheet and performing defensively well on debut.

Fowler followed this up with another 90 minutes under his belt, taking part in their 3-2 away defeat against Hungerford Town as the defender continued his run of games for the Stones.

Most recently the young defender player his latest 90 minutes for Maidstone in their 1-0 home defeat against Slough Town.

The defender also almost found himself able to score his first goal for the Stones in the last few minutes of the game, but was denied after an outstanding save by Jonathan North in the Slough goal. 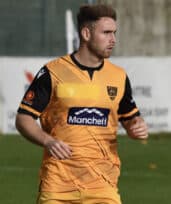 George returned to the Hartley Wintney matchday squad by taking his place on the bench for their Buildbase FA Trophy encounter with Melksham Town back in late October.

The young midfielder did return to the starting line-up in their next fixture against Walton Casuals in the Pitching In Southern Football League Challenge Cup, but unfortunately saw Hartley defeated 2-1 by Waltons Casual.

Sheridan continued to be involved since returning from injury, taking his place on the bench against Chesham United, alongside fellow Aldershot Town academy graduate Harry Taylor who recently moved to Hartley Wintney from Maldon & Tiptree. 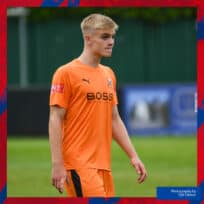 Rabbetts started the game against Merthyr Town but picked up a minor hamstring injury and will look to be back in contention for Met Police’s next fixture against Chesham United on Tuesday 9th November. 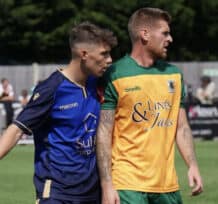 Alfie has made a solid contribution at full-back, starting all six games in October and overseeing a clean sheet in a debut home win (2-0) over Truro City in tricky conditions.

Another clean sheet followed in the success on the road at Wimborne Town, as Boro won the remaining four games in all competitions. The 20-year-old defender showed his versatility, being deployed at left-back as Farnborough overcame Bowers & Pitsea (4-1) in The Buildbase FA Trophy. 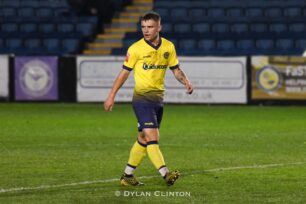 Josh made four starts throughout October and began with a bang on his debut; being taken out by a Wimborne Town defender, who was shown a straight red card, when through on goal. That proved to be the turning point as Farnborough went on to record victory (2-0) from there, in a game that saw Boro take a whopping 40 shots on goal.

The 23-year-old won a successfully converted penalty in the next game – a midweek home victory over Gosport Borough (3-1) – before helping Farnborough to wins over Kings Langley (4-1) and Dorchester Town (2-1).

The forward however has picked up an injury that he hopes to returns from soon having impressed during his time with Farnborough so far. 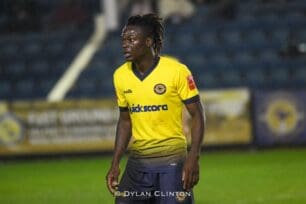 Jayden put in a really impressive performance on his debut for Hampton & Richmond in central midfield, providing plenty of industry and work rate alongside real quality on the ball.

For Hampton & Richmond’s second goal, Jayden played in a key role, driving into the box before his shot hit the post and rebounded into the path of Kyron Farrell to smash home.

After their 4-3 defeat to Dulwich Hamlet, manager Gary McCann said this of Harris: “I thought Jayden was excellent on his debut.”

The young shot-stopper made his Wimborne Town debut last Saturday, featuring in their 3-3 home draw against Kings Langley.

In what was a frantic game, Hall saw his temporary side go two goals in front before a late first-half consolation for Kings Langley before the away side found their equaliser in the 51st minute.

Wimborne retook the lead just a few minutes later from the penalty spot, but again Kings Langley found their third and equalising goal in the 90th minute of the game.

The Aldershot Town academy graduate will look for more game-time experience for when he returns to the EBB Stadium soon.