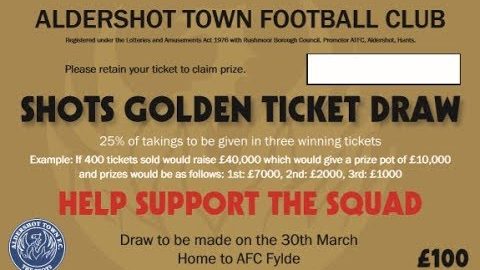 We’re pleased to announce that we have surpassed the 250 mark for our Golden Ticket fundraising campaign.

Your Golden Tickets have so far helped fund the signings of Gerry McDonagh and Johnny Goddard as we head into this crucial end-of-season run in.

Following on from Saturday’s game against Chesterfield it has taken our number of tickets sold to as of 4:30PM on Monday 21st January to 256.

You can purchase your Golden Ticket online HERE.

Shots Commercial Manager Mark Butler gives you an update in the video below: