Aldershot Town were pleased to welcome former Shots striker Joe Nartey back to the EBB Stadium on Saturday as he enjoyed the 1-0 victory against Guiseley AFC.

The Ghanaian, who scored 27 goals in 76 appearances between March 1998 and December 1999, is back in the country for a short time having moved back to his homeland in January to establish his own franchise of taxi company Addison Lee in the capital, Accra.

Joe, now aged 40, had worked for Addison Lee in England for 10 years before returning to the city of his birth. Having retired from playing in the summer of 2005, Nartey briefly moved into coaching as Reserve Team Manager at Waltham Forest in 2007, but Shots fans will fondly remember his 20-month spell under George Borg which was typified by exuberant pace and lethal finishing.

Joe joined The Shots from Chertsey Town for a fee of £4000 in March 1998 and, although he only sored one goal for the club in the 1997-98 season, it was a hugely significant one, as the strike which clinched a 3-0 victory at Wokingham Town and confirmed The Shots as Isthmian League Division One champions. He also became the first player to score for and against Aldershot Town in the same season, and remained Chertsey Town’s top scorer for 1997-98.

Another, more famous first came in September 1998, as Joe became the first Shots player to score five goals in one game, in an 8-0 victory against Bishop’s Stortford, including four in a devastating eighteen-minute spell in the second-half. He nearly repeated the feat in the return game in February 1999 – his first game back from a loan spell at Billericay Town – but having notched a first-half hat-trick had to settle for four goals in a 5-0 victory.

In the next game, three days later, Joe scored another hat-trick in a 7-2 thrashing of Walton and Hersham and in his time with The Shots won three honours: the Hampshire Senior Cup (as a substitute in the Final against Basingstoke Town at The Dell), Isthmian League Charity Shield and Henkel Challenge Shield.

Sadly he couldn’t maintain that sort of goalscoring form and left The Shots in December 1999, joining Chesham United for £3500 as The Generals finished third in the Isthmian League Premier Division, seven points behind the second-placed Shots.

After his career in football ended, Joe worked in IT/XDA Support for Addison Lee, and has now returned to Accra.

Joe is pictured, below, with Club Statistician and Historian, Pete Stanford. 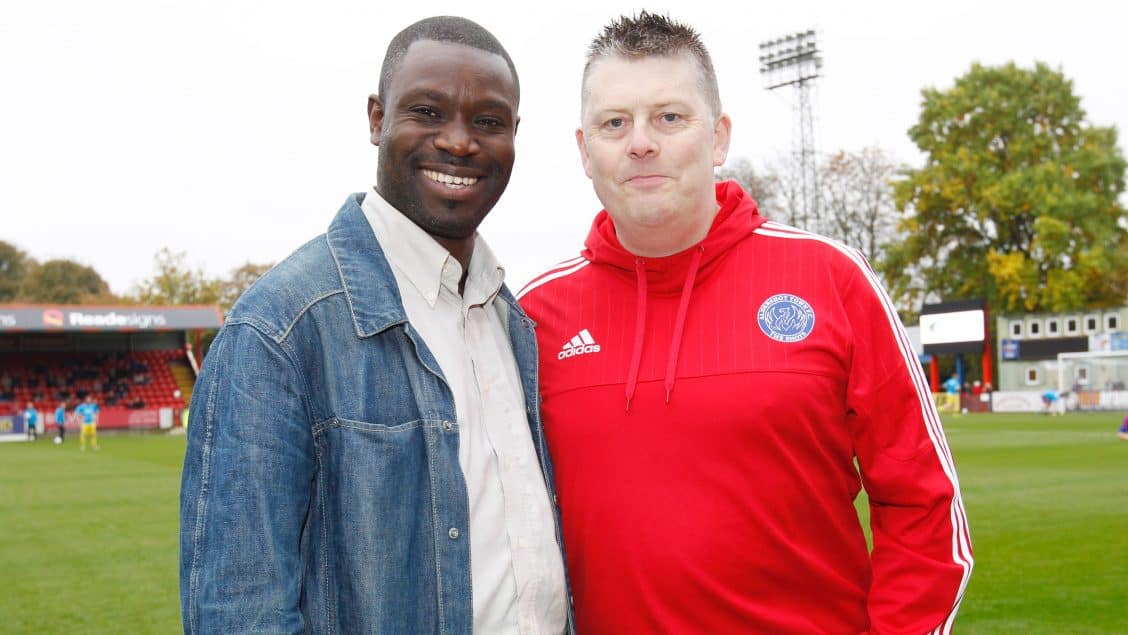