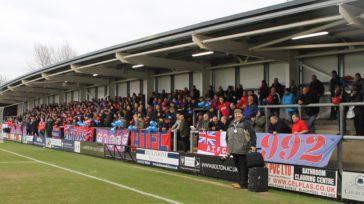 Shots Squad:
Manager Gary Waddock remains without injured Hull City loanee goalkeeper Will Mannion, who is recovering from a quad injury and Reading loanee George Legg is likely to deputise. Skipper Karleigh Osborne (Achilles) is close a return. Marvin McCoy is yet to make his Shots debut due to an injury that has kept him out since pre-season. Shamir Fenelon is a doubt after missing the Bromley game through and injury picked up at Havant & Waterlooville.

Brief History:
AFC Fylde were founded in 1988, as Kirkham & Wesham following the amalgamation of Kirkham Town and Wesham taking Kirkham Town’s place in the West Lancashire League. They won the FA Vase in 2008 and then changed their name to AFC Fylde. They play at Mill Farm (Wesham), are nicknamed The Coasters and finished 7th in their first season at National League level last term.

The Gaffer:
Former Tranmere Rovers, Stockport County and Bury defender Dave Challinor is in charge of The Coasters. Challinor ended his playing career and started his managerial experience at Colwyn Bay, whom he guided to Runners-Up spot in the Northern Premier League in his first season at the helm, eventually gaining promotion to what was the Conference North via the Play-Offs. In November 2011, he was announced as the new manager of AFC Fylde, who at that time, played in the Northern Premier League Division 1 North. His impact was instant, gaining promotion (as Champions) in his first season and then guiding The Coasters to NPL Play-Offs the following season. They lost on that occasion, but gained promotion to the Conference North twelve months later.

Following another promotion in 2016-17, Fylde went on to finish seventh in their first season at Non-League’s ‘top-table’.

Outgoings:
A total of seventeen players left Mill Farm at the end of last season – including loanees. The most notable departures included; Jake Lawlor & Simon Grand (to Salford), Sam Finley (to Accrington) and Jack Muldoon (to Harrogate).

Referee:
Saturday’s referee is Marc Edwards and this is his 6th National League game this term. Last season he took the middle on 18 occasions, showing 50 Yellow cards and 2 Red cards. He did not referee Shots last season.

Commentary:
BBC Surrey Sports Rob Worrall and Aldershot Town FC Communications Manager Chris Woods will be covering the game live on Saturday afternoon. Tune in to the BBC Sport website (or the BBC Sport App) from 2:50pm for full match commentary. To interact with them, tweet @RobShot66 and/or @CWoodsy14.