The Shots Foundation next week launches its own SSE Wildcats Centre, as part of the Football Association’s programme to inspire more girls aged 5 – 11 to be involved in football.

Launched by the FA last year in conjunction with energy supplier SSE, the Shots Wildcats Centre will be based at St Joseph’s Primary School, with weekly sessions starting on Tuesday 8 May, from 5.30-6.30pm, and running for an initial 16-week period.

The Centre will allow Aldershot Town and The Shots Foundation to continue the successful Sunday morning girls football sessions, also held at St Joseph’s Primary School, and further plans to establish a Girls Football Development Centre and Aldershot Town Girls Team in the near future.

As part of the FA’s target to double girls’ participation in football by 2020, with over 900 Centres planned for around the UK catering for 26,000 girls, the Wildcat scheme provides girls of all abilities with regular opportunities to play football and take part in organised sessions in a fun, engaging and safe environment. Alongside these sessions, there will also be opportunities for the attending parents, carers and siblings to engage with sport in ‘Family Sessions’, such as Soccercise or Walking Football at the same time.

Kelly Simmons, FA Participation and Development Director, said: “Since the launch of SSE Wildcats we have seen great enthusiasm from the girls taking part to continue learning and playing football. The centres have proved a huge success and we are pleased to be able to considerably grow the size of the initiative in 2018, offering a much higher percentage of girls across the country the opportunity to enjoy football in a safe and inspiring environment.”

The Shots Foundation, launched in July 2017, aims to use the power of sport and the brand of Aldershot Town FC to offer a range of health-related activities to charities, community groups and schools. It has already launched football projects for members of Rushmoor’s Nepalese community, local homeless people, and a Sunday morning coaching session for girls aged 5-11 at St Joseph’s Primary School.

Watch two videos, here and here, explaining more about the Wildcats scheme and how it can help young girls play football. 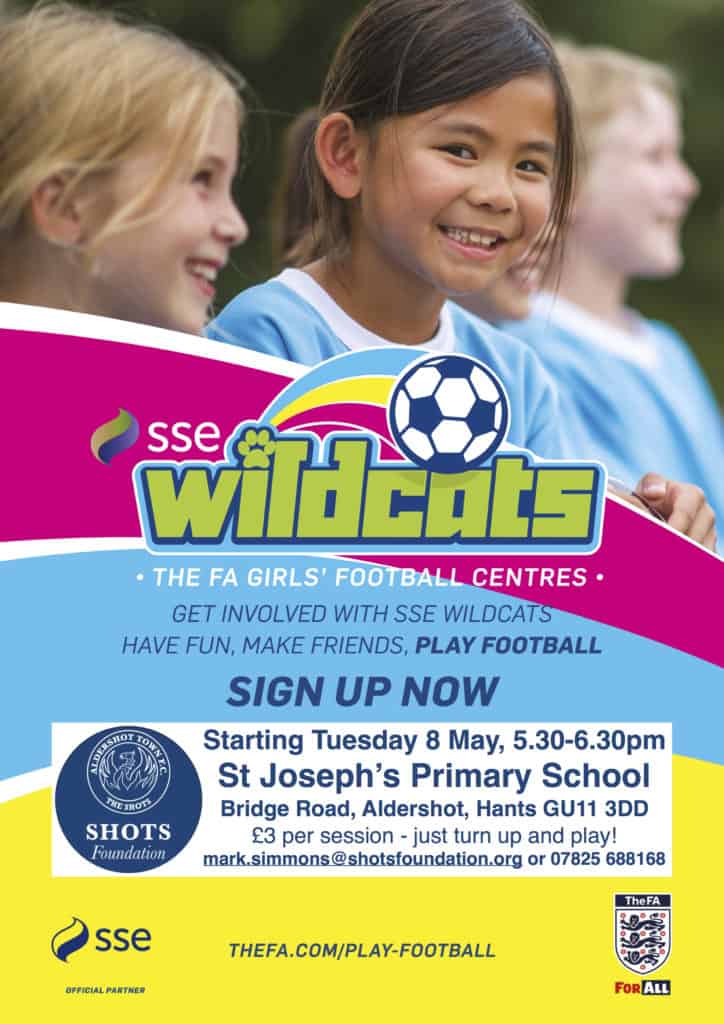