The 2021/22 Vanarama National League fixtures have been released with the Shots beginning the season with a home game against Chesterfield FC on August 21st at 3pm at the EBB Stadium.

Our Christmas fixtures see us host rivals Woking on Boxing Day before we make the short trip to the Laithwaite Community Stadium to face Woking again just after New Year’s Day on the 2nd January, with a trip to Dagenham & Redbridge sandwiched between the two games on the 28th December.

We face Yeovil Town yet again on Good Friday/April 15th at the EBB Stadium as we host Dagenham & Redbridge at home on Easter Monday/April 18th.

The Shots enter the Emirates FA Cup 4th Qualifying Round on Saturday 16th October and enter the Buildbase FA Trophy on Saturday 18th December. We will release more news on these draws later on this year.

After dropping out of the Football League, Grimsby Town visit Aldershot Town on Saturday 13th November and The Shots also travel to Blundell Park on Saturday 12th February.

We will also revisit Southend United on Tuesday 14th September as the Shrimpers come back to the EBB Stadium on Tuesday 25th January.

We thank you for your continued support and hope to see as many of you in the ground for our first game of 2021/22 against Chesterfield FC at home.

We can’t wait to get underway on August 21st to spur on Danny Searle’s men. 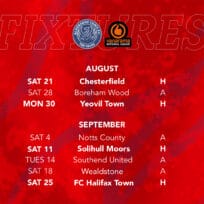 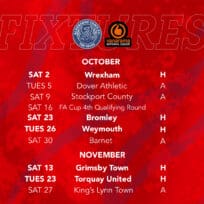 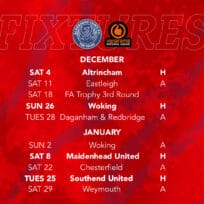 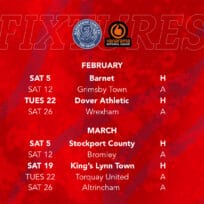 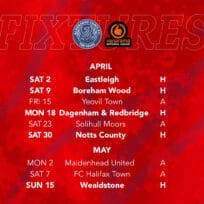