Aldershot Town’s Football in the Community Trust won the ‘Best Schools Project’ award at the recent National League Annual Congress, after a year in which the Club reached over 15,000 local children.

The scheme beat 71 other National League clubs in its promotion of curriculum support, exercise and healthy lifestyle choices, and will now reinvest the £5000 prize to make the scheme even better in 2016-17.

With great support from first-team players in assisting the Trust’s three full-time and 16 part-time coaching staff, schools across Rushmoor and Hart boroughs have benefitted from projects including Double Club – which combines literacy and numeracy work with sports coaching – plus the exciting Half-Time Shoot-Out during home games, stadium tours and, of course, football skills for both teachers and pupils.

During the year, the Trust worked with 15,237 children, including over 6000 girls, in running over 2500 free curriculum sessions and 4200 after-school sessions. This includes the Soccer at Six project which runs in Aldershot, Church Crookham, Farnborough, Fleet and Yateley to welcome boys and girls of all standards, many of whom have been referred by schools, youth clubs or social services as a reward for outstanding achievements.

A registered charity independent of ATFC, Aldershot Town’s Football in the Community Trust is partly-funded by the National League to promote participation in and understanding of the benefits of football, provide enjoyable activity and healthy exercise for all ages, and increase awareness of Aldershot Town FC.

“It’s always great to receive recognition for our work,” explained FITC Manager Kirk Wheeler, “and we are delighted with this award. My staff, led by Louise Neil and Sam Jones, have done a fantastic job. It’s a big challenge to work with so many schools, and spread the word about the Club, so I must also thank every single school which has worked with us this year.

“We see how much of a tremendous thrill it is for pupils when a professional footballer comes to their school. Meeting a player is such a huge buzz for a child and creates an instant personal connection.

“We would welcome enquiries from new schools across the region to join our project from September 2016.” 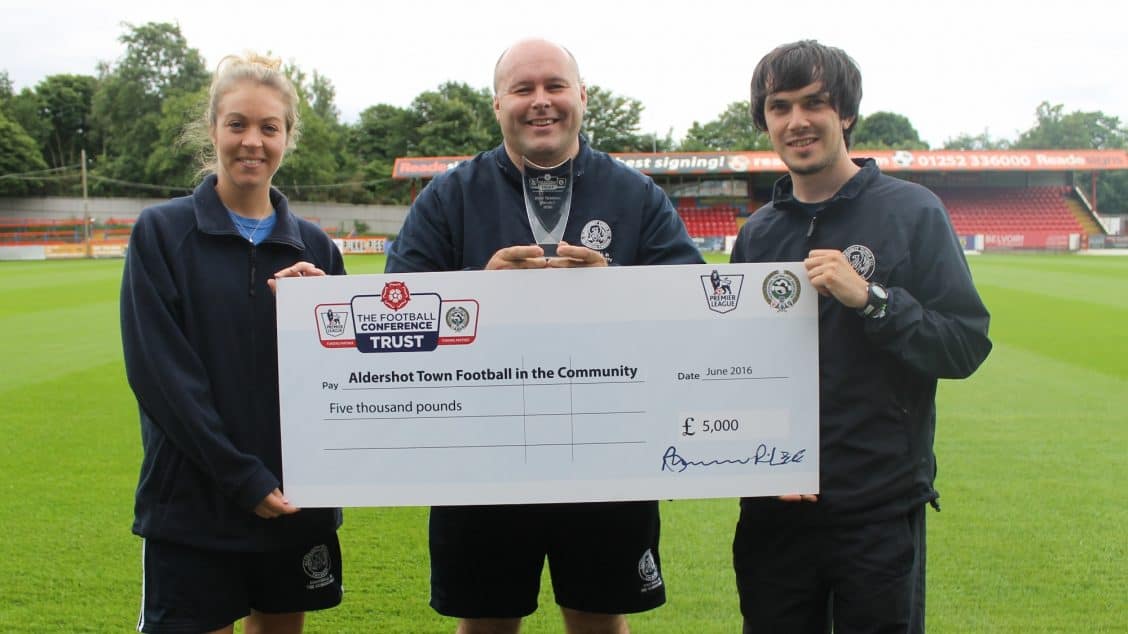