Around 100 fans attended our newly formatted forum which saw six members of different hierarchy within the club present their collective vision as well as giving an update on their areas of the club. 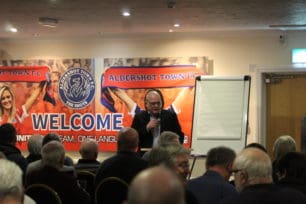 In addition to those in attendance, up to 100 people tuned into our Facebook live stream of the event, giving those who weren’t able to attend in person an opportunity to see the presentations and the questions themselves. The two live streams of the vent are available to re-watch on our Facebook page if you missed the forum HERE:

Commercial Manager Mark Butler spoke about his progress with the club’s commercial plans since the last Fans Forum in November, with the club starting a new initiative called ‘In With A Shot’, which you can find out more about HERE and the progress the club has made since the creation of the scheme.

Foundation Manager John Monday also spoke about the work he has been doing within the Foundation since his arrival at the club around a year ago, with initiatives such as Football v Homophobia, Man v Fat and Talking Football which all have a deeper meaning to him as he explained during a touching presentation. 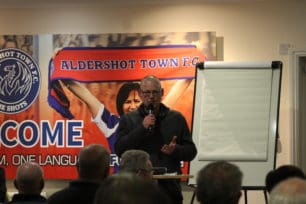 Media & Marketing Manager Henry Port also spoke on his progression with the club’s Media and Marketing having joined just over five months ago along with his future events and plans for the club in a media-sense moving forward. 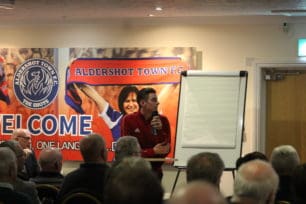 Director of Academy Waleed Khan provided an update with the club’s academy progress as a number of young players have been making great progress all the way through from our u8s to our u23s. Waleed also kept fans up to date with the success of our age groups in both the league and cup competitions with the u16s making it to the Surrey Cup Final and u18s top of their Bostik League too, along with plenty other achievements from all our different age groups too. 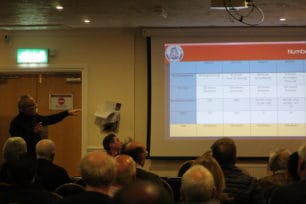 During Chairman Shahid Azeem’s presentation, Rushmoor Borough Council’s David Clifford also spoke on the progress of the new stadium developments as the club looks to move forward with its future plans.

First-team Manager Danny Searle finished off the presentations as he asked fans what the club means to them along with looking forward to his plans and challenge to supporters to completely fill the East Bank terrace as many times as possible before the end of the season.

Let us know you’ll be helping us achieve this challenge by using the hashtag #FillTheEastBank! 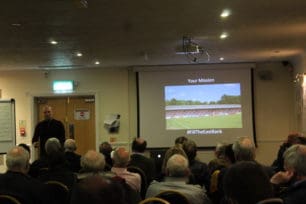 These presentations were made in the first hour before a short break took place. During the first half of the forum and the break, fans were prompted to write down any questions they had for the club on a slip of paper provided.

Fans were also advised to send in questions prior to the event via email if they had any and were maybe unable to attend on the night.

Mark Butler then went through all of the questions that were asked during the second half and the club hierarchy answered those questions posed to them.

The Chairman of the Aldershot Town Supporters Club Ray Hedgeman was there on the night and gained a few new members during the evening. You can still sign up for the supporters club.

To find out more, please speak to a member of staff at our next home game next Saturday against Boreham Wood and we can arrange forms for you to fill out.

Our first fans forum of the new season will be announced in due course.