The National League have reluctantly announced that General Manager Dennis Strudwick plans to retire “in the coming months” after eight years in the role.

No fixed date has yet been set, as the League seek to implement the correct strategy before beginning the search for a replacement and ensuring a professional handover.

After more than 50 years in the game as a player and administrator, Dennis was one of 150 servants in football to be selected by the Football Association to receive a Grass Roots Hero medal in 2013, presented by Prince William. He was also honoured with the FA’s Long Service to Football award at the 2015 National League AGM (pictured below).

Dennis’ last eight years has been spent as General Manager of the Football Conference but is now planning for the final whistle to blow on an illustrious career.

National League Chairman, Brian Barwick, said: “Dennis has been the central cog in all that has happened in the Competition since he joined in 2007. He has spent a lifetime in the game and was further honoured by the Football Association at our recent AGM. We are grateful that Dennis has agreed to oversee the start of the new season before he retires to a ‘seat in the stands’. 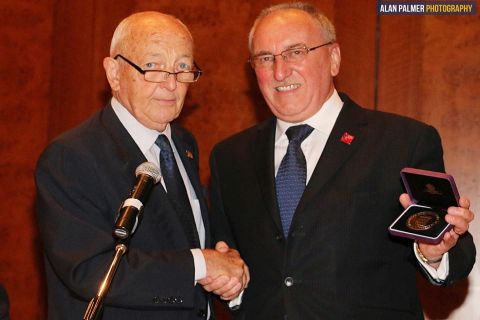