Aldershot Town Academy striker Dan Mellors will be giving us a daily update from Nepal as The Shots compete in the Aaha! RARA Gold Cup.

Day One, as the squad leaves Heathrow and, after 16 hours spent travelling nearly 5500 miles, they finally arrive in Kathmandu to a fabulous welcome…

“It was a bit overwhelming, really, with so many people waiting for us, and a really nice touch to be greeted with traditional scarves and garlands. Everybody really appreciates this opportunity, and the fact that we are seen, in some eyes, as important people to these local communities – everybody has been greeting us with big smiles and asking about the football. We have to treat people how we would want to be treated in our homeland.

“We’ve just had a nice meal at our hotel in Kathmandu and then it’s straight to bed as we have an early call in the morning to travel to our first friendly, against the Nepal Army Reserves tomorrow morning. It’s been a long day, especially with having to wait five hours for our connection in Doha, but we’re still feeling fresh, and that’s why we’ve been adjusting our sleep patterns back home in the build-up.

“Tomorrow’s friendly is the first obstacle of many – we know it’s going to be tough but I think the team are ready. We’ve got a few days to prepare for our Quarter-Final on Tuesday – it will be a wonderful experience for us and you’ve got to use those butterflies in your stomach to positive effect, rather than crumbling under the pressure. It will be natural to feel nervous, in front of such a big crowd, but we’ve got to handle it.

“We’re hoping to play three games in five days, leading up to the Final next Saturday, but we’re young enough and fit enough to deal with that. We’ll be doing extra fitness training out here to maintain those levels, and the aim is definitely to win three matches. Hopefully in 90 minutes, rather than adding an extra half an hour!

“But however we do it, we’re here to win the trophy. We respect all of the other teams, of course, and aren’t saying we’re going to win, but we’re focussed on our aims. I think we’ve got a good chance.” 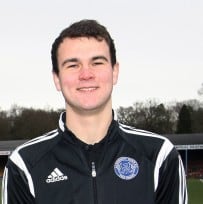