Aldershot Town supporter Henry Proudlock has done an incredible job by raising £2000 for the club in a shirt raffle!

Commercial Manager Mark Butler was hugely impressed and thankful of the generosity the Proudlocks have shown to support our club.

“What can I say about the people of Aldershot? Many of you have already stepped forward in various ways by signing up for In With A Shot and getting your season tickets early.

“The Proudlock family have been absolutely fantastic and Henry contacted me saying he had some shirts, because they regularly sponsor players, that he was going to raffle off to raise even more money for the football club during this current, unprecedented situation with the pandemic.

“Henry has managed to raise £2000 for this football club in a shirt raffle. I can do nothing but say his praises as high as possible.

“He has been truly fantastic. There have been others as well, you’ve all been amazing!

“There will be another small shirt raffle from the actual club, but this is a spectator ringing me and then taking the initiative himself, giving this fantastic football club £2000.

“Can’t speak highly enough of you Henry, thank you so much!”

Henry himself explained why he was so passionate and eager to do something like this, and where the idea came from.

“I saw similar raffles on Twitter for signed memorabilia and when the shirts arrived I just thought, why not give it a go and auction these off to raise funds for the club.

“Initially I thought we may raise around £150 but to get to £2000 has just blown me away! I can’t thank everyone who donated enough.

“The reason I did it is because I have been going to Aldershot since I was a young boy with my dad and I just instantly fell in love with the club. 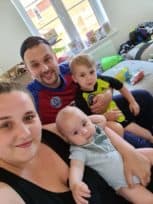 Henry Proudlock and his family of Shots supporters

“I used to love standing in the East Bank near the drums. My 4 year old Bobby is now Aldershot mad and is currently the youngest season ticket holder at the club and it is something we as a family love to do.

“I hope to be able to take our youngest Albie as soon we are able to.”

Once again, the football club thanks Henry for his initiative and generosity with this raffle to help the club.