Chairman Shahid Azeem and Director Deane Wood were delighted to be at the Aldershot Branch of the Royal British Legion on Tuesday evening to pick up the certificate for £3483.82 and present an Aldershot Town signed poppy shirt to the British Legion.

The club would like to thank the players, staff and supporters of Aldershot Town for raising over £3,000 since the 2014 Poppy appeal. 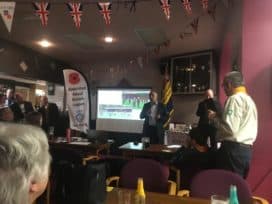 The Royal British Legion couldn’t be thankful enough for the club’s support towards their Aldershot branch and they truly believe that without Aldershot Town’s help, they wouldn’t have reached such a large sum of money over the last few years.

Every year, the Poppy Appeal have more than 2,000 people depending on your continued support as much as they do. You can help them by giving whatever you can, either to one of the collectors or by calling 08457725725. 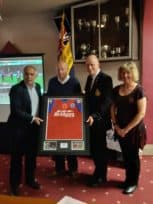