Like Gary Waddock’s squad, new Shots Head Groundsman Colin Wilson is putting in the hard yards during pre-season to ensure everything is alright on the night of 9 August – but it’s already been worthwhile.

“I’ve not seen such a friendly atmosphere as here,” admits the Scotsman, who estimates that each cut of the EBB Stadium pitch sees him walk over seven miles in charge of his mower. “I was quite overwhelmed by how friendly the atmosphere around this Club is compared to others that I’ve been to. Everybody has been great.”

“We are delighted to welcome Colin to the Club,” said Chairman Shahid Azeem. “He was recommended to us by, amongst other people, Chelsea Head Groundsman, Jason Griffin, and his Assistant Head Groundsman, Kevin Fowler. He has been fantastic so far – he’s really bought into the Club and has a great personality. It was vital that he would get on with our volunteers as well as being an excellent groundsman.”

Wilson has previously worked at such celebrated venues as Gleneagles, Hertfordshire’s Grove golf resort, Reading’s Madejski Stadium and Wycombe’s Adams Park, as well as around the world, from Denmark to Australia. Now, a full-time partner in TurfTonics, a sports turf specialists, he arrives in Aldershot to maintain one of the best pitches in lower league football.

“It’s been quite intense, lots to do and lots of people to meet,” he suggests, after two cuts on Friday afternoon in preparation for the MK Dons game. “The pitch needed a bit of work but we’ve been working pretty intensively this week. It’s getting there – the grass is thickening up and cutting it more often does help it thicken a bit.”

Describing his entry into the turf industry as “purely by chance”, Wilson admits: “I used to be a massive golfer and turned my hobby into my job. Our background is golf, essentially, but football seems a better industry at this point in time. Our knowledge seems to go a bit further in this industry than with golf. It’s new, it’s exciting, and always seems really positive to get involved with a new challenge.”

Born in Kirkcaldy, Wilson grew up supporting his local side, Raith Rovers, only to find his loyalty dashed on one of the biggest days in the Club’s history. “I was football daft. I watched them home and away for years,” he remembers, “until they put all their Cup Final tickets on general sale and I couldn’t get a ticket! We beat Celtic in the 1994 League Cup Final and I vowed never to go back!”

Since then his allegiance has reverted to his family’s club. “My dad was from Aberdeen and I used to go to as many games as possible, but I could never get tickets. Then I took up golf because I couldn’t play football anymore!”

Scottish football’s loss is now England’s gain, and his experience reaches literally down to the grassroots of the sport. “You get a good buzz out of helping non-league teams,” he smiles, “because they have 100 games a season on their pitch – they’ve not got much money to spend and the pitch is their main source of income, so they have to make the most of it.”

On the face of it, a football pitch and golf green offer vastly different challenges, but are the processes of a groundsman and greenkeeper so opposed? “In theory, you’re after the same thing – a smooth, true surface. But (the EBB Stadium) is 25-30mm in length, whereas a golf green is 3-4mm. It’s grass at the end of the day, isn’t it?

“A lot of the cultural practices are the same – spiking, aeriation, scarifying – they’re just a little bit different. The cutting regimes are higher too – you’d cut a golf green six times a week but in football it’s probably 4 or 5. You need to give it a rest sometimes.”

Once again, though, Colin has had a bit of help from his (new) friends. “I’ve worked on sand-based pitches before, so it’s not something that’s unusual to me. The guys have been brilliant and a massive help. They’ve been helping here for years and have some site knowledge that I’ve been trying to pick off them – you can’t buy that information!

“It’s experience that you only build over time, and I’m just trying to keep those guys on side! I didn’t want to be the new guy coming in and upset them, so to have help like that is invaluable.” 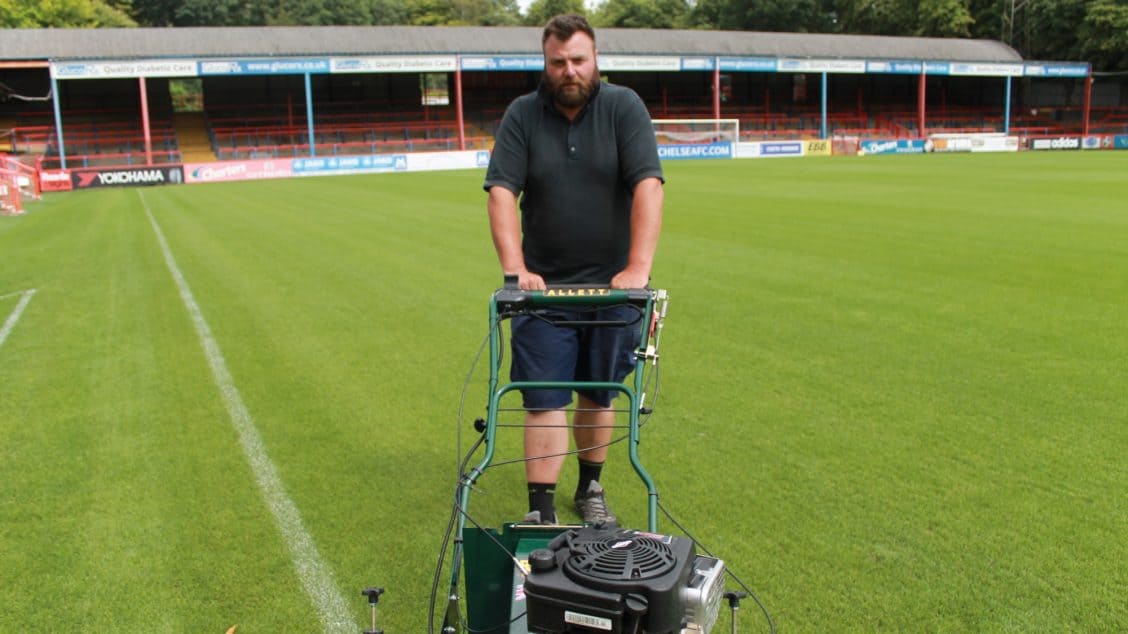 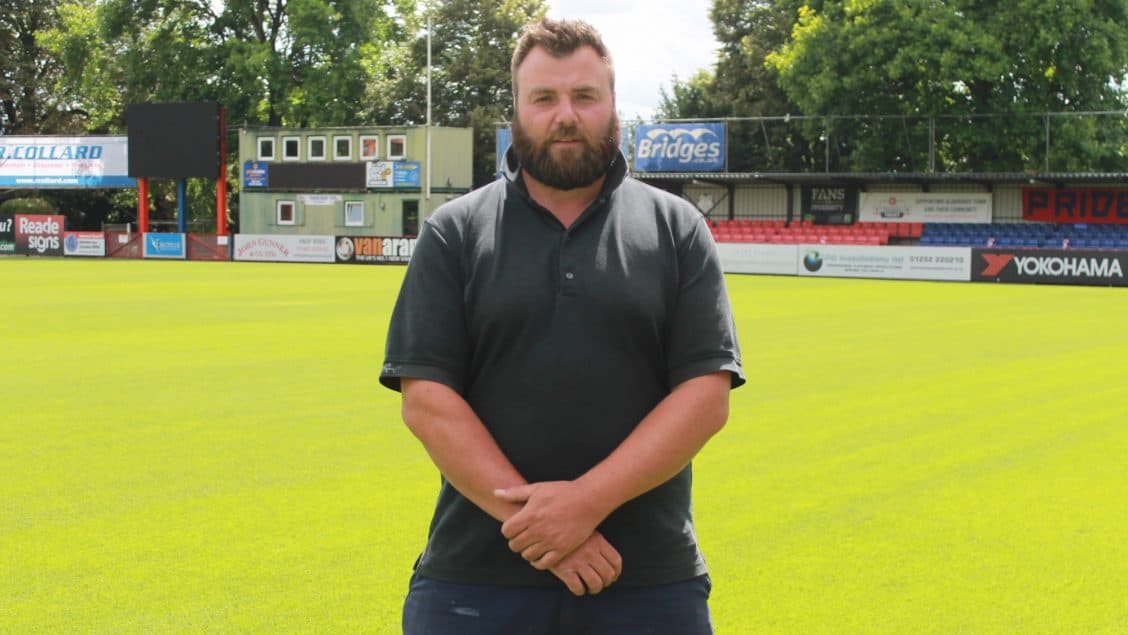 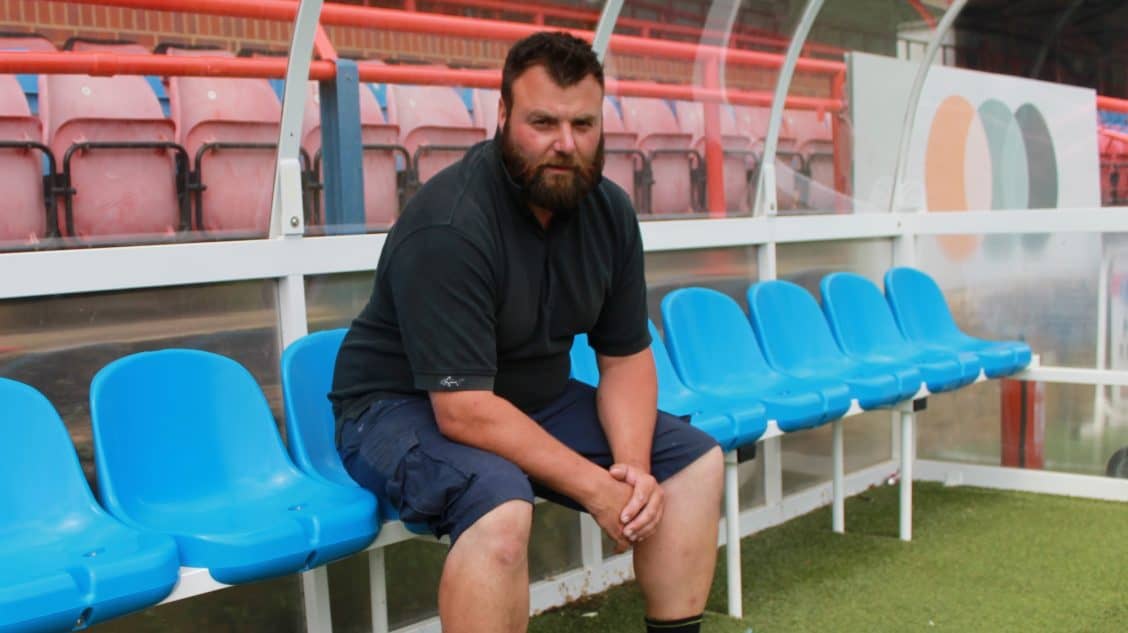