“I am afraid there will be little jollification for the Aldershot players during the Christmas holiday” sympathised the Aldershot News and Farnborough Chronicle on 19 December 1930, as The Shots prepared for a remarkable and rather hectic schedule of three matches in as many days.

Yet, buoyed by a superb and entirely unexpected 3-1 FA Cup second round victory at Gillingham the week before, Angus Seed’s side began the period with a 3-1 home win against Bath City in a London Combination fixture on 20 December and then earned two wins and a draw to spread festive cheer around the Recreation Ground.

Guildford City visited Aldershot on Christmas Day for an 11.15am kick-off, followed by the return match on Boxing Day and a home game against Dartford on Saturday 27 December!

“Guildford Trounced” was the headline as The Shots showed little seasonal goodwill to their neighbours with a 7-1 thrashing on Christmas morning, witnessed by a crowd of about 3000. With the season split between Southern League and London Combination fixtures, it was Aldershot’s first win of the Southern League campaign, having taken just a single point from their first three fixtures.

The News and Chronicle described it as “a fast and interesting game, throughout which Aldershot were superior, the Guildford defence finding it very difficult to cope with their attack”. The prolific Jock Thom was the team’s undoubted talisman that season – with an incredible 68 goals in 42 games – but he was temporarily overshadowed by winger Dave Edgar, whose hat-trick illuminated the game with the second, third and sixth goals in the rout.

Guildford missed a penalty with the score at 4-1 but the visitors were never truly in it and The Shots’ “accurate passing swept them repeatedly through the City defence”.

Boxing Day saw “a capital display of team work” from City, and they matched The Shots until effectively being reduced to ten men due to injury. Gus Smith scored another, to add to his two the previous day, and Thom also notched his second in 24 hours to earn the victory.

Dartford then visited the Recreation Ground to complete the triumvirate and gave a much better performance than November, when they were beaten 6-0. On a heavy pitch which hampered both sides’ passing, Dartford took an early lead, on just five minutes, and Shots goalkeeper William Robb had to be in fine form to preserve the single goal deficit. George Richardson equalised to earn a point which moved Aldershot up to sixth in the 10-team division.

Seed made just one change to his line-up across all three matches, and that only because half-back Jimmy Gardiner succumbed to a recurrence of his hand injury in the closing stages on Christmas Day.

This had been The Shots’ first taste of Christmas Day football, a tradition which lasted until 1957, by which time Aldershot had played 21 matches on 25 December. 1930, though, was the only time they played on three consecutive days.

At least the Southern Railway Co had helpfully laid on extra Boxing Day trains, between Aldershot and Guildford, priced very reasonably at 1s 3d and returning “in time for supporters to finish off the Christmas cakes left from the preceding day”! 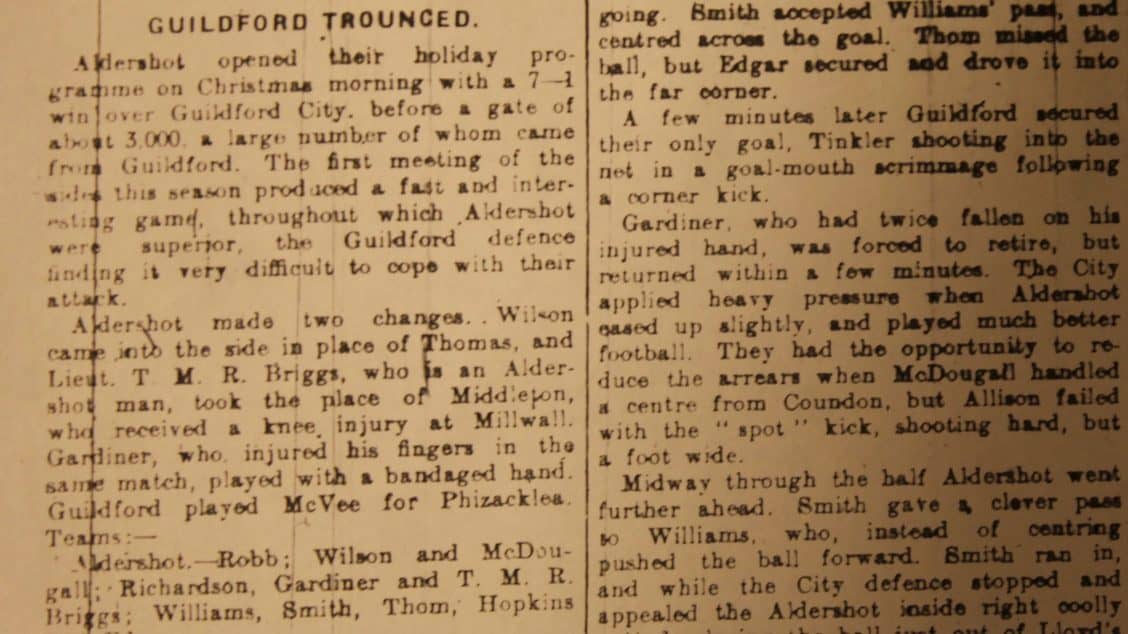