On Saturday, Chelsea Under 23’s will take to the pitch against their Liverpool counterparts looking to extend their impressive form. Chelsea’s young side come into the match having lost only one match in their last seven. The Chelsea team features a number of exciting young players such as Wales Ethan Ampadu, highly rated Scot Billy Gilmour and the thrilling Callum Hudson-Odoi.

Taking on Arsenal and Swansea, the young Red’s team come into the match with a strong record, having only lost one in their last six. However, Chelsea’s opposition fell to a 4-0 defeat to Arsenal in their last fixture and will be looking to resurrect their start to the season.

You can see two of the top under 23 sides in the country go head to head at The EBB Stadium on Saturday 29th September. Entry costs just £3 for Adults and £1 for concessions for the 12pm kick off. All Chelsea and Aldershot Town season ticket holders can get into matches free of charge.

Following the end of the Under 23 match the JML will be open and serving drinks. From 5pm the EBB Lounge will be open to serve drinks and offer free pizza as the Chelsea v Liverpool First Team match is shown live on TV, kicking off at 5.30pm.

The Shots would like to invite everyone down to the stadium for a packed day of football while the first team travel to take on Hartlepool United. 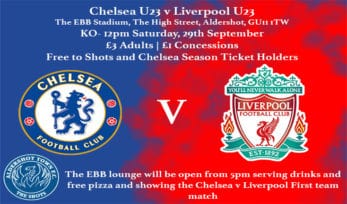