Over 2500 people commemorated the centenary of the legendary 1914 Christmas Truce as the British Army beat the German Bundeswehr 1-0 in an enthralling game at the Electrical Services Stadium.

With Sir Bobby Charlton, FA Chairman Greg Dyke and Aldershot MP Sir Gerald Howarth amongst the guests of honour, the occasion – which was covered by media from around the world – was a fitting tribute to a unique moment in history.

BBC One’s The One Show, with former Olympic sprinter Iwan Thomas broadcasting live from the stadium, interviewed the two team captains, Sgt Keith Emmerson and MSgt Alexander Hess, in the build-up as the touchline became a scrum of cameras and journalists. Sky News, Sky Sports News, BBC Radio 5 Live and Football Focus all covered the game, along with the Guardian, Telegraph and Daily Mail newspapers, CBS News, Canadian television and Germany’s ARD Radio.

The Marching Band of the Royal Logistics Corps provided the pre-match entertainment, before 17 year-old classical singer Marilena Gant led a poignant rendition of Silent Night, with verses sung alternately in German and English.

The winning goal, scored in just the third minute by LCpl Calum Wilkinson as he swept in the rebound from Pte Matt Glass’s parried cross, saw the game start at a thrillingly high tempo which rarely relented during 90 minutes which could have produced many more goals. That it didn’t was due in no small part to German goalkeeper, Cpl Andreas Forster, whose performance at times single-handedly kept out a British Army side who many reckoned before kick-off to be the underdogs.

A few early decisions saw both sides question the neutrality of the Swiss referee, Steffan Klossner, yet even though fully committed and hugely competitive this was a match played in the required spirit. The result remained in the balance through injury-time, during which both sides hit the woodwork: picking up the rebound from his own shot, SSgt Florian Stahl’s angled drive smashed against the crossbar, before Wilkinson went up the other end and saw a shot finally beat Forster but not the post.

Through it all, the East Bank continued to resound with the familiar chant of ‘Come on you Reds’, but this time it came from the personnel of Aldershot Garrison, whose uniforms, blending in with the concrete terraces, gave the noise a rather ghostly air.

A friendly it may have been, but LCpl Wilkinson still admitted: “To score in front of this many people and on this occasion is a big feeling for me. I don’t think any of us have ever played in front of that kind of crowd so it was really good. It’s a massive occasion. The 15 minutes before kick-off, with the minute’s silence and Silent Night, was really, really a nice moment. I got shivers down my neck.” 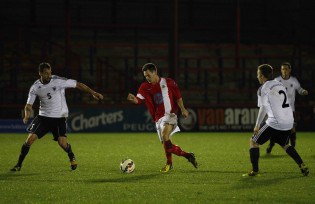 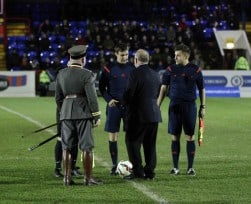 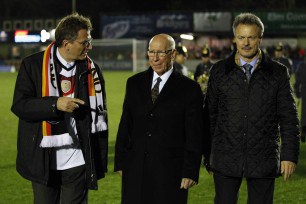