Bridges Estate Agents and Aldershot Town FC are offering two supporters a unique opportunity to play alongside an array of Shots legends this Friday – and help to raise money for Phyllis Tuckwell Hospice and the Simon Pearson Leukaemia Appeal!

Two places remain in Butler’s team, and will go to the two highest bids placed before 5pm on Thursday. Bids should be submitted via email to mark.butler@theshots.co.uk. All proceeds from these bids will be donated to Phyllis Tuckwell Hospice and the Simon Pearson Leukaemia Appeal, established in aid of Bridges’ Client Manager who was diagnosed with leukaemia in 2016.

Entry to the match is FREE, so come along to help celebrate the great charity work carried out by Bridges – and enjoy a fun night including the kicking of Estate Agents!

The Shots Legends team is led by Player-Manager Mark Butler, the Club’s record goalscorer with 155 goals in 303 appearances. He will be partnered by another two of The Shots’ greatest strikers, in Steve Stairs – who played with Butler in the Club’s first ever match in 1992 – and Gary Abbott. Abbott scored an incredible 120 goals in just 156 games to put himself second in the Club’s all-time scorers list, with Stairs in third on 75 goals. Completing the array of attacking talent is Mark Anderson, who scored six goals in 33 games for The Shots between 1994 and 1996, before going on to score over 250 goals for Sandhurst Town!

In midfield, Glenn Burvill played 313 games for Aldershot FC, scoring 44 goals, and was part of the 1986-87 team which beat First Division Oxford United in the FA Cup third round and won promotion to Division Three via Play-Off victories against Bolton Wanderers and Wolves.

The back four will be led by commanding centre-back Mark Harper, who captained The Shots to the Isthmian League Division One championship in 1998 and won three Isthmian Premier Division titles in four years from 1997 to 2001, with Kingstonian, Sutton United and Farnborough Town, He is joined by versatile defensive-midfielder Jason Tucker, who made seven Football League appearances for Aldershot FC in 1992, before twice returning to the Recreation Ground to play 33 games and score 10 goals for The Shots between 1996 and 1998, either side of a move to Enfield for a then Club-record fee of £5000.

Last summer, Bridges Estate Agents extended their sponsorship of The Shots to 2020, taking the deal into a seventh year to make them the longest-serving shirt sponsor in the Club’s history! A family-run business established in Ash Vale in 1991, and now also boasting branches in Aldershot, Camberley, Farnborough, Farnham and Fleet, Bridges are the market leaders in North East Hampshire and West Surrey in property sales, letting and management, and provision of conveyancing services.

Bridges have also continued their support of the Phyllis Tuckwell Hospice, one of Aldershot Town’s own official charities, and in 2016 raised over £25,000 through a series of events including a charity match at the EBB Stadium featuring former England goalkeeper David James. 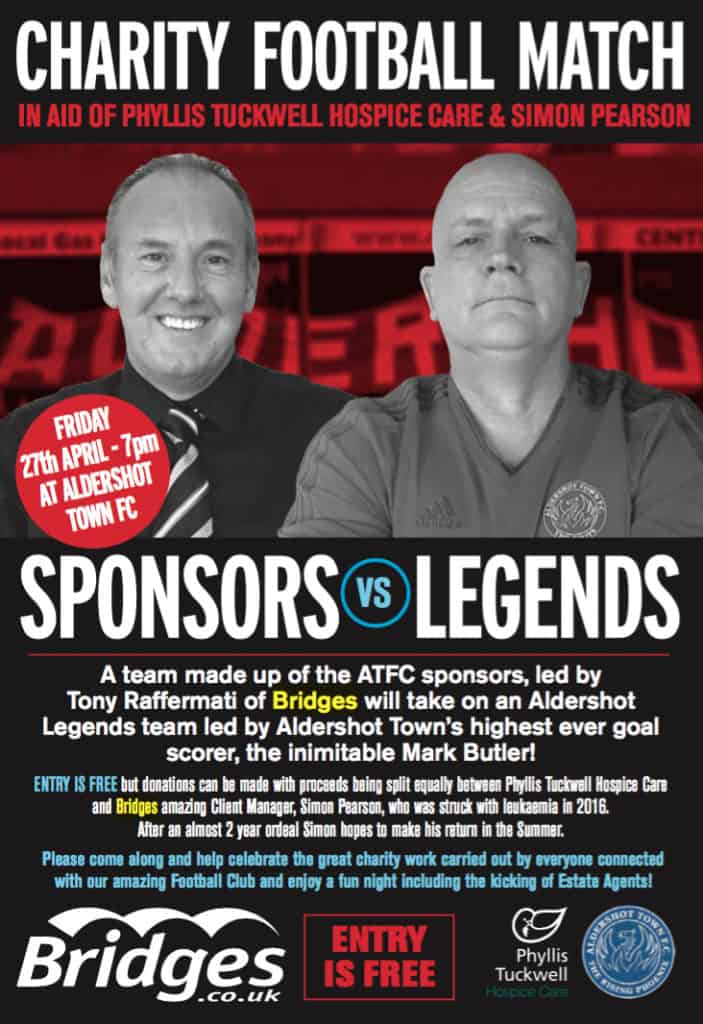