The EBB Stadium is pleased to host the 2020 Inter-Services game between the Army and Royal Navy on Wednesday 25 March 2020.

Kick-off for the game is 7:00pm so it’ll be a great game under the floodlights at the EBB Stadium for all those in attendance.

Admission for the game is free as the Army look to defend their Inter-Services title in a competition which has been contested every year since 1919 with the exception of the Second World War.

It’s a highly-anticipated game between both sides of the forces and is expected to be a great spectacle for all those involved.

We look forward to seeing as many people at the EBB Stadium for the game as possible. 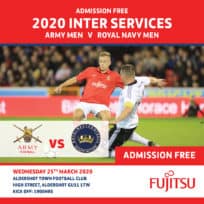