With over 2300 appearances and 430 goals between them, these are the players you have selected for your All-Time Aldershot Town XI.

Well over 1000 votes were cast, covering 80 players from throughout the Club’s 25-year history, from cult heroes to bona fide legends. Several positions were very keenly contested and remained in the balance until the last few votes, whilst others were, predictably, more clear-cut!

Thanks to everybody who took part – we hope your favourites made the cut! Let us know what you think – would you have picked a different team? 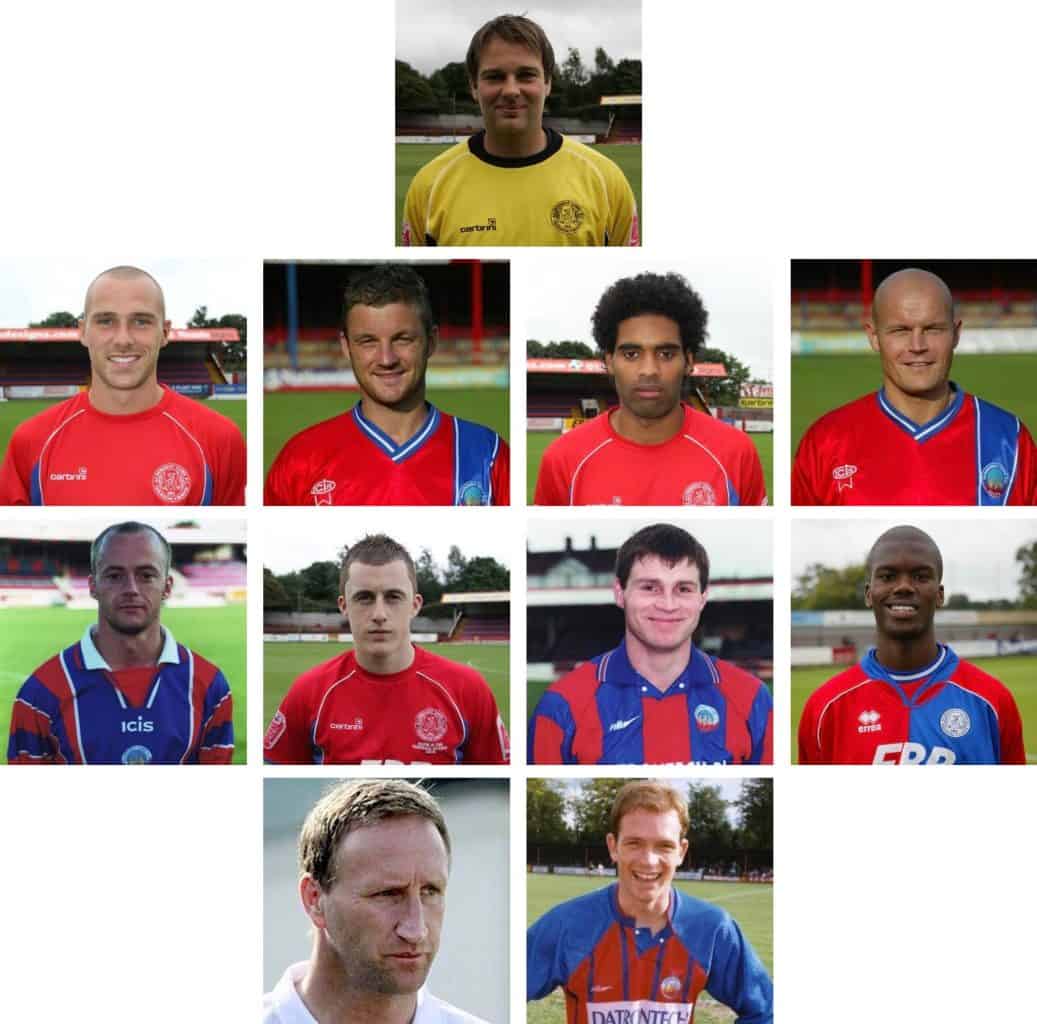 GOALKEEPER: Nikki Bull (2002-09, 313 apps, 1 goal): Second in The Shots’ all-time appearance list and the goalkeeper who helped take Aldershot Town from Ryman Premier Division to League Two. Named The Shots’ Player of the Year three times, in 2003, 2006 and 2008 – as well as Blue Square Player of the Year as The Shots won promotion to the Football League in 2008 – Bull even scored a penalty in front of the East Bank on the day the Ryman Premier title was secured.

CENTRE-BACK: Ray Warburton (2003-05, 98 apps, 5 goals): An undisputed legend at virtually every club he has played for, Warbs joined midway through our Isthmian Premier Division-winning season and came within a penalty-shoot-out of achieving a third promotion to the Football League in four years as The Shots lost the 2004 Play-Off Final to Shrewsbury Town. Injury eventually forced his retirement, but Warburton’s 2004 Supporters’ Player of the Year award illustrated his influence.

CENTRE-BACK: Anthony Charles (2002-11, 229 apps, 15 goals): Sixth in our all-time top 10 of appearance makers, Charles graced The Shots in three spells and won both the Isthmian League Premier Division and Blue Square Premier titles as well as being named Player of the Year and Players’ Player of the Year in 2008-09. In our second Football League season, Anthony captained the side into the League Two Play-Offs and became the first Shots player to make 100 Football League appearances.

LEFT-BACK: Jason Chewins (1994-2004, 489 apps, 15 goals): Nobody has played more Shots games – or probably won more Man of the Match awards – than Chewy! The only Shots player to be granted a testimonial, Jason won 12 honours at the Club, including Isthmian Division One and Premier Division championships, the Isthmian League Cup and four Hampshire Cups, and was twice named the Club’s Player of the Year. Thankfully, that loan move to Bognor Regis never happened…!

RIGHT-MIDFIELD: Jimmy Sugrue (1995-2001, 200 apps, 44 goals): Combative winger who enthralled crowds at The Rec in three separate spells. Named our 1997 Player of the Year, Jimmy won Ryman League Division One in 1997-98, the Ryman League Cup in 1999 and two Hampshire Senior Cup Finals. As feisty as he was skillful, Sugrue was also part of the team which reached the FA Cup second round for the first time in our history and finished second to Dagenham & Redbridge in the Ryman Premier.

CENTRAL-MIDFIELD: Scott Davies (2007-12, 98 apps, 26 goals): Scored typically spectacular goals on both his Shots debut, against Kidderminster Harriers, and Shots Football League debut against Bradford City, and in between fired the stunning 94th minute winner which beat Torquay United on that legendary night at Plainmoor as we chased the Blue Square Premier title. The Republic of Ireland Under 21 international was our top scorer in 2008-09 and thrilled the EBB Stadium with his all-action performances.

CENTRAL-MIDFIELD: Dave Osgood (1992-97, 167 apps, 38 goals): Our first-ever captain and a midfielder who wore both heart and armband on his sleeve, Ossie won two promotions with The Shots and led us to the FA Vase quarter-finals. Often seen trying to climb into the East Bank whilst exuberantly celebrating a goal, Osgood – the nephew of Chelsea legend Peter – scored our first goals in both FA Cup and FA Trophy.

LEFT-MIDFIELD: Joel Grant (2006-08, 61 apps, 10 goals): A Jamaican international who was part of our Blue Square Premier title-winning squad in 2008 and earned the extravagant nickname of “the non-league Cristiano Ronaldo”! Valentino mesmerised opponents as we also won the Setanta Shield and reached the FA Trophy semi-final, before joining Crewe Alexandra for a Club record fee.

STRIKER: Gary Abbott (1998-2001, 156 apps, 120 goals): George Borg’s decision to pay £8000 for a 33 year-old was entirely and immediately vindicated with a club-record 48-goal haul in his first season. Abbott was top scorer in each of his three seasons with The Shots, including another 45 goals in 1999-200, for which he was named Non-League Player of the Year. He scored ten hat-tricks in his Shots career and scored in 11 consecutive games between January and April 2000.

STRIKER: Mark Butler (1992-98, 303 apps, 155 goals): The Club’s all-time record goalscorer, with a strikerate of better than 1-in-2 over six seasons. Scored The Shots’ first-ever goal, in the 4-2 victory against Clapton in August 1992, and notched 30 goals in our first season. He was the first Shots player to score a hat-trick – going on to notch another seven in red and blue – and was top scorer in three of his six seasons at The Rec. We’re still drinking to toast Butler the King!