Aldershot Town chairman Shahid Azeem was part of a group of Rushmoor, Hampshire and Aldershot figures who came together for a commemorative service for the 75th anniversary of VJ day at Municipal Gardens, Aldershot on Saturday. 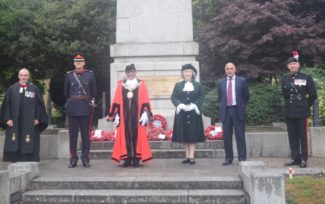 Everyone involved on the day came together for prayers and a minutes silence to remember our war heroes. We will remember them.

The following is everyone who attended and was part of the ceremony.